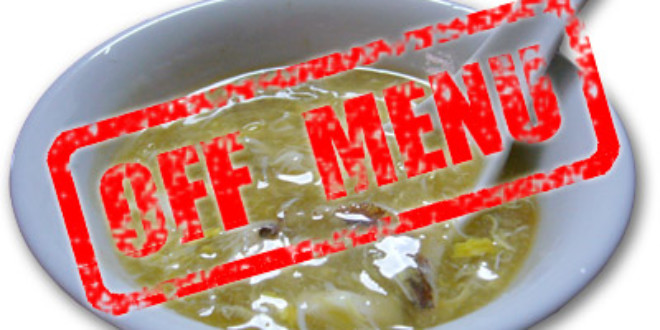 Taiwan Restaurant To Cut Down Serving Shark’s Fin After Protests

(From monstersandcritics.com)Taipei – Taiwan”s most exclusive restaurant on Wednesday gave in to protests from US and Taiwanese conservation groups and agreed to remove serving shark”s fin from its banquet menus. However, the Environment & Animal Society of Taiwan (EAST) demands the restaurant remove shark”s fin completely, not just from a special menu. “Taiwan catches and imports a total of 600 tons of shark”s fin each year. Shark”s fin is a luxury food. Serving shark”s fin at the Silk Palace damages Taiwan”s international image,” EAST said in a statement.

‘Taiwan residents should boycott eating shark’s fin and the government should launch a campaign to raise public awareness,’ EAST added.

EAST said harvesting shark’s fin was very cruel because after cutting off shark’s fin, fishermen throw sharks back into the sea, letting them bleed to death.

Killing sharks for their fin depletes the population and the disappearance of the predators has serious consequences for the marine environment, the statement said.