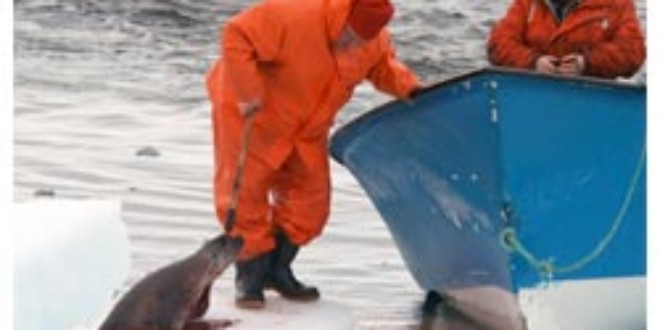 The European Commission adopted today a proposal for a regulation banning the trading of seal products within, into, and from the European Union to ensure that products derived from seals killed and skinned in ways that cause pain, distress and suffering are not found on the European market. Trade in seal products would only be allowed where guarantees can be provided that hunting techniques consistent with high animal-welfare standards were used and that the animals did not suffer unnecessarily.

Environment Commissioner Stavros Dimas said: ” We propose a ban on the placing on the market and importing into EU, transiting through, and exporting from the European Union on seal products. Seal products coming from countries which practice cruel hunting methods must not be allowed to enter the EU. The EU is committed to upholding high standards of animal welfare.”

Addressing the welfare of seals during hunting

The aim of the proposed regulation is to address the animal welfare aspects of the killing and skinning of seals during a hunt by ensuring that products derived from seals killed and skinned in ways that cause pain, distress and suffering do not find their way to the European market.

Seals are sentient mammals which can experience pain. The Commission proposal seeks to address the concerns expressed by the European Parliament and the general public that seals are being killed and skinned using practices that unnecessarily inflict pain and suffering. European Food Safety Authority (EFSA) scientific opinion indicates that seals can be killed rapidly and effectively by a number of methods without causing avoidable pain, distress and suffering, but evidence shows that effective killing does not always happen in practice.

Trade in seal products would be allowed only where guarantees can be provided that hunting techniques consistent with high animal-welfare-standards were used and that the animals did not suffer unnecessarily. In countries where seal hunting continues a certification scheme would be established, coupled, if necessary, with a distinctive label or marking, which will ensure that seal products traded are clearly certified as coming from a country meeting strict conditions.

The aim of the Commission’s proposal is to uphold high standards of animal welfare.

The proposal will now be submitted to the European Parliament and to Council for their approval.

Seal hunting in the world

The 30 species of seals can usually be found along the coasts of polar and sub-polar regions of the globe, but some can also be found in some temperate regions. Of these, some 15 species are targeted for hunting with an estimated population of 15-16 million. Seal hunting occurs year round, but the hunting season varies on the region and the species targeted.

Canada, Greenland, and Namibia account for about 60% of the 900.000 seals hunted each year. Other countries which hunt seals include Iceland, Norway, Russia, and the United States, and in the European Union Sweden, Finland, and the United Kingdom.

Seals are hunted mainly for their skin, fat, and meat. The methods used to kill seals and their effectiveness vary considerably. These include shooting seals, clubbing or catching them in traps and nets.

All documents can be found at: