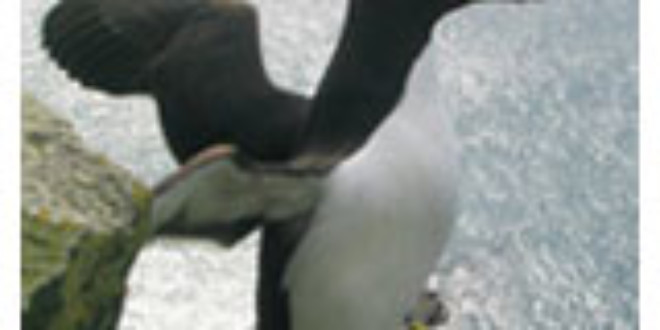 (From johnogroat-journal.co.uk)- Scottish Natural Heritage wants to extend the Special Protection Area for the north”s colonies of seabirds – which currently covers their nesting areas on the cliffs at Duncansby, Dunnet Head and Stroma – to include the Inner Sound, an area considered to be one of the best for tidal power schemes. Former Highland councillor Bill Mowat, who was at last week”s meeting in Canisbay, pointed out that Scottish Power Renewables is planning to install up to 20 tidal-stream devices in the Pentland Firth which could generate between 10 and 20 megawatts of energy. The north seabird colonies are recognised as being of international importance, and SNH believes it is necessary to extend the protection area to cover the coastal waters where breeding birds may fish. It covers common guillemots, razorbills, Atlantic puffins and northern fulmars.

Under the new proposals, the extended protection area would run up to two kilometres into the marine environment to provide better protection for the seabird interests off the existing terrestrial SPA.

A decision on the extended SPA will ultimately be made by the Scottish Government after the consultation period ends on September 22, but it could be early next year before that happens.