Home / News / Marine Mammals / Once again, the shores of the Faroe Islands ran red with blood this summer 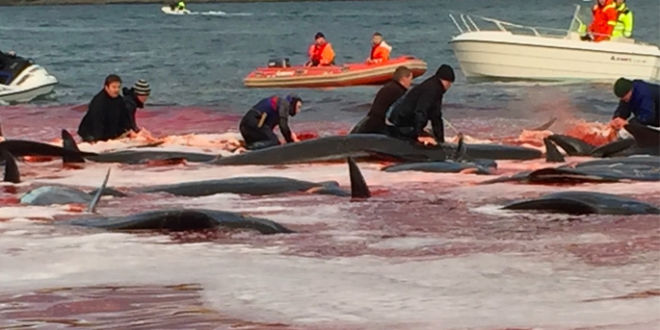 Once again, the shores of the Faroe Islands ran red with blood this summer

On Sunday 26 May in the evening, for the fifth time this year, hunters living in the town of Hvalba in the Faroe Islands, a remote archipelago north of Denmark, drove a pod of 61 pilot whales that were swimming close to the shore near Hvalbiarfjörður.

The hunters revved their engines to create a wall of sound that would trap the pilot whales and used their boats to physically block them.

Once the pilot whales or dolphins are killed, the animals’ bodies are dragged onto the shore and cut up so the meat can be distributed amongst the locals. Whatever’s leftover is usually sold to local restaurants or sent to a fish processing plant.

The Faroe Islands are part of the Kingdom of Denmark, which is part of the European Union. Under EU law, pilot whales are a protected species.

In the past 50 years, it’s estimated that the Faroe Islands have killed over 62,000 pilot whales and dolphins.