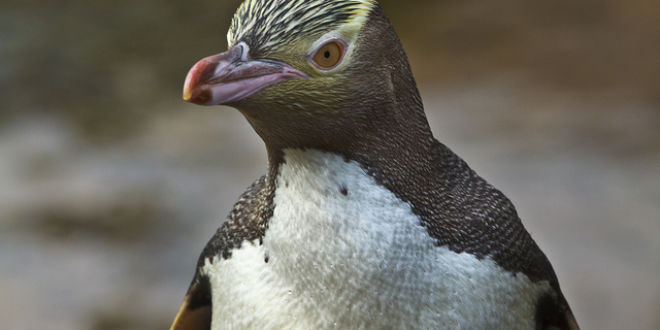 Yellow-eyed penguin is endemic to New Zealand where it breeds on the South Island’s south-east coast.  It is considered one of the world’s rarest penguin species- The species is thought to be declining overall as a result of a number of threatening processes, principally introduced predators, habitat conversion, and disturbance. Human disturbance, particularly from unregulated tourists at breeding areas, negatively affects energy budgets, fledgling weight, and probability of survival. By-catch mortality in the commercial gillnet fisheries is an unquantified but potentially significant cause of mortality, There is a suspected but unconfirmed link between changing sea surface temperature and penguin vital rates, whereby productivity and survival are projected to decline under predicted climate change. The species is described as ”Critically Endangered” by the World Conservation Union (IUCN).