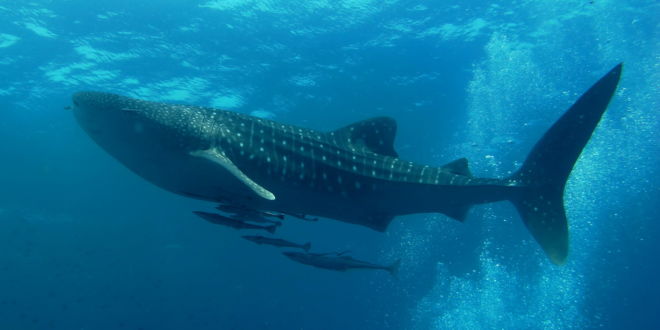 Whale sharks are one of only three filter-feeding sharks in the world and are highly migratory animals. Whale sharks are highly valued on international markets. Demand for their meat, fins, and oil remains a threat to the species, particularly by unregulated fisheries. While most deliberate fishing for them has been halted, they are still taken in large numbers as a bycatch. Marine debris such as plastic bags and bottles are endangering whale sharks through the risk of entanglement or ingestion of this garbage. Whale sharks are filter feeders, meaning they consume large quantities of small prey by straining them out of the ocean water. In the process, they swallow hundreds to thousands of cubic meters of water daily, meaning there is the potential for them to take in substantial amounts of microplastic floating in the water. The species is described as ”endangered” by the World Conservation Union (IUCN).