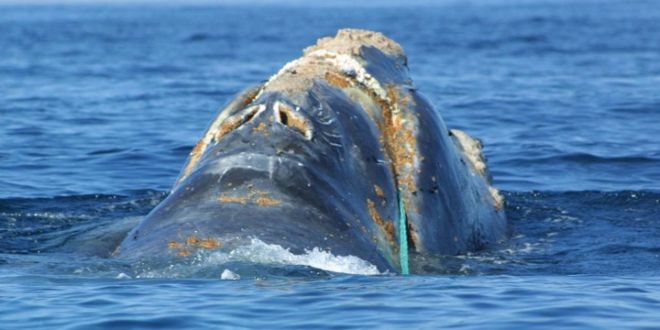 - UNDATED PHOTO - Scientists and environmentalists on June 27, 2001 were reassessing plans to free a rare right whale, shown in a recent, undated photo, tangled in fishing line off the Cape Cod coast after earlier attempts to save the leviathan failed. The North Atlantic right whale, one of 100 to 500 of the endangered species remaining, has green fishing line deeply embedded in its upper jaw. The resulting wound is badly infected and the whale is likely to die unless the line can be removed or falls out on its own. - PBEAHULABCF

A Canadian surveillance plane was scanning the waters of Gulf of St. Lawrence when it made a grisly discovery: The carcass of a North Atlantic right whale, one of some 400 remaining in the world, was drifting in the current, much of its skin sloughed off.