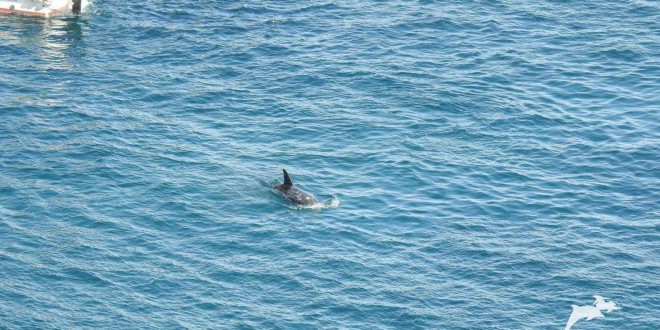 It was an extremely traumatic day for dolphins in Taiji today. Two species – two families – were harassed and massacred. Firstly, a pod of Striped dolphins, including a calf. A few hours later,  small pod of Risso’s dolphin.

After putting up a tough fight during the drive, these dolphins, in exhaustion, finally succumbed to the hunters pursuits and were forced into the Cove.

Even once netted in, the hunters continued to throw lead weights at the pod and imitate the banging sound of the banging boats to further threaten them.

The family huddled close together, the calf never leaving its mother’s side, before the hunters chased them under the tarps by aggressively revving the engines of their skiffs at them.

Cove Monitors witnessed a few dolphins throwing themselves at the rocks in a panic, meanwhile divers were grabbing at others and tying ropes around their tails to hand over to the hunters who would then drag them to their deaths.

The distressing sound of thrashing began and continued for several minutes, followed by the sinister sound of bodies being thrown onto a skiff, before it then left the Cove covered in tarps. A total of 15 Striped dolphins were slaughtered today, including the calf. But the hunters weren’t finished yet.

As the first pod were being driven closer to the mouth of the Cove, Cove Monitors had noticed a second group of boats in formation driving from the South.

They were charging after a small pod of Risso’s dolphins, who were also putting up a strong fight, as the banger boats circled behind them several times as the pod made efforts to escape.

Like the Striped pod, as they were netted into the Cove, these dolphins had weakened, swimming much more slowly than before.

And again, the banging continued, but this time because one determined dolphin had escaped and tried to make a getaway.

The hunters greedily persisted and managed to trap the individual in with the rest of his family, and then pushed all of them together under the tarps to be slaughtered.

One individual got caught in the nets, at the same time as a diver wrestled with its tail in attempt to tie a rope around it.

The dolphin managed to free itself and kick away the diver, but unfortunately swam in the direction of the beach, where he was then killed.

A total of 6 Risso’s dolphins were murdered, in addition to the 15 Striped dolphins that had been decimated earlier that morning.

Be a voice for the voiceless: TAKE ACTION