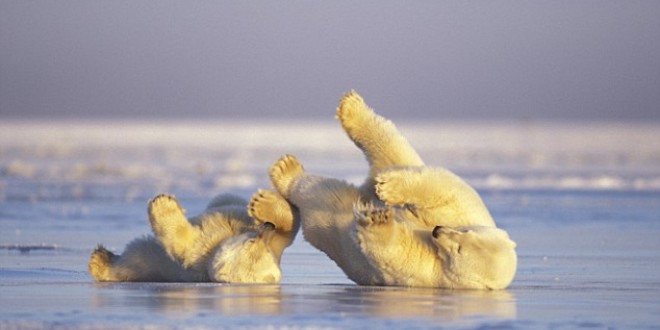 The private life of the polar bear

A formidable hunter and powerful swimmer, the polar bear is perfectly adapted to the harsh demands of the wild Arctic landscape. And these extraordinary pictures give a more intimate portrait of its life than ever before.
Whether diving under water, rolling in the ice alongside a cub or moving in for a breathtaking close-up, these images capture its raw beauty and amazing grace.

The photographs were taken by Steven John Kazlowski, 39, who has spent the last 16 years travelling to the Arctic to take pictures of the amazing wildlife in the region.

His new book ‘The Last Polar Bear’ features images taken over the last five years which he hopes will highlight the animal’ plight.

Global warming is weakening the ice in the Arctic and shortening the season during which it is close enough to shore for bears to move easily between floes and the shore.

Many bears find themselves stranded either on land, where adequate prey is difficult to find, or on ice miles out at sea.

‘The changes in the Arctic are just the start of the global climate changes we will see, and it’s not too late for us to make some smart choices.

‘My hopes are that people will understand that there is an environment as amazing as the one great buffalo herds once roamed across North America, and that it’s changing extremely rapidly because of the way we have chose to live as a society, and that we are all connected.

‘The intelligence and social abilities of polar bears are quite something.

‘I have watched polar bears break holes in ice to thaw out frozen meat. They can wait for days at a seal hole without moving, which puts them in my mind to be a more zen-like animal.

‘Compiling this book has pushed me in many new directions in the Alaskan Arctic, and has been a very difficult yet wonderful existence.

‘It is not only the story of the polar bear but this amazing environment found off the coast of Alaska, along 800 miles from east to west above the Continental shelf.

‘It hosts a rich web of life – animals and people included.’

Mr Kazlowski splits his year between Washington, Seattle and the Arctic and has now embarked on a lecture tour to publicise the threats facing the polar bear.

Many biologists and climatologists believe that by the end of the century, the creature could be the first to disappear altogether from the Arctic.