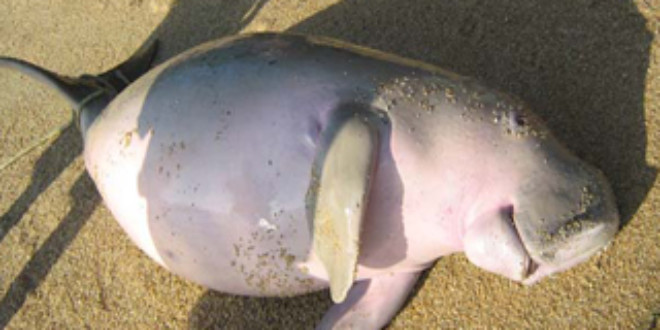 The Thai government was urged Thursday to seriously and urgently protect the dugongs in Thai Andaman coastal waters, as the mammals are on the brink of extinction — if appropriate conservation measures are not quickly implemented. Marine mammal academic Kanchana Adulyanukosol at the Phuket Marine Biological Centre said that there are now only about 200 dugongs left in Thai-Andaman waters, where they are usually found in sea waters off Trang, Krabi, and Phang-nga.

“The sea cows are at risk of extinction in 20-30 years. If no concrete measures are implemented to conserve the species, no one will ever again see the sea cows in Thai waters,” the expert on distinctive rare species warned.

Currently, Ms. Kanchana said, a master plan to conserve sea cows and seagrass, which was its main diet, was drafted, but has yet been submitted to the Cabinet.

It was believed that if the scheme is implemented, it will help, in a certain extent, to preserve the sea cow population, she said.

Public awareness activities to realise the importance and seriousness of the dugongs’ problems is necessary were also recommended, she said.

Ms. Kanchana added that seven dugongs had been found dead during the past six months.

The causes of death are varied, she explained. The latest case is a five-year-old dugong weighing 122 kilogrammes which was found dead at a beach in Trang.

According to the Centre’s autopsy, the dugong died of shock when it was caught in the nets of a fishing trawler.

Dugongs are commonly found in the Indian and Pacific oceans, Australian waters, and the western coast of southern Thailand. The dugong population has fallen rapidly, she said, and now is in critical condition due to hunting and accidental drowning in nets.

In addition, the dugong’s ability to produce its offspring depends on the availability of seagrass, its main diet, which has now become scarce due to water pollution.

The mammal has also been listed as vulnerable to extinction at a global scale by the World Conservation Union (IUCN).