Home / News / Turtles / Zaenuddin MZ: Taking the turtles, back to the wild 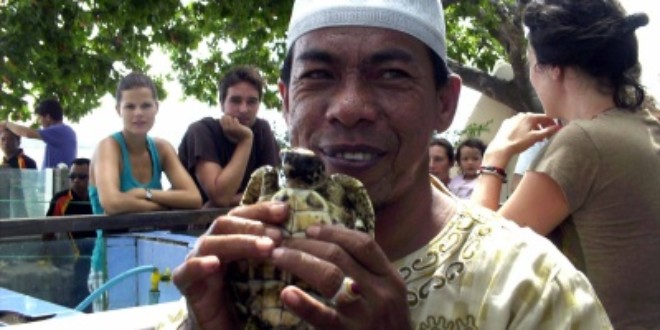 Zaenuddin MZ: Taking the turtles, back to the wild

Releasing turtles back into their natural habitat is an annual program conducted by the community in Gili Trawangan. The activity has helped increase the number of tourists coming to the beach.
The activity was possible thanks to Zaenuddin MZ, 45, who has been working to protect the turtles since 1995.

“At first I collected turtle eggs to try hatching them and raising the hatchlings. At the time, many people thought that I must have been mad to try. But it was worth all the effort because it worked and it attracted tourists, who can now see groups of turtles in the waters of Gili while diving or snorkelling,” he said.

Zaenuddin, who is better known as Dino, began to think about developing a turtle nursery at the end of 1994.

At that time he saw that that many communities still consumed turtle eggs and some people caught turtles to sell. At the same time, the turtle population continued to decline.

“I thought then what a pity if this beautiful animal became extinct because their eggs kept being taken before they were able to hatch,” he said.

One morning, a turtle egg seller came to him bringing 132 turtle eggs, which cost Rp 125 each. After paying for all those eggs Dino started to experiment.

He learned the techniques from the turtle egg collector by asking him about the behaviour of the turtles’ mother; when she digs the hole in the beach, lays the eggs and covers the hole to protect the eggs.

“It makes me happy to see the tourists happy when they see the turtles while diving or snorkelling,” he said, adding that apart from sharks, napoleon and other aquarium fish, tourists can still spot rare creatures like green and hawksbill turtles in the waters off Gili.

For his work, Dino does not hope for any award but he does expect the government to pay attention, at least to reduce the exploitation of this endangered species.

“In some areas there are still many people who consume turtles’ eggs and meat. There are even many restaurants serving them. If possible, the government should control them,” he said. “Isn’t it better to have this rare animal roaming in our seas?”