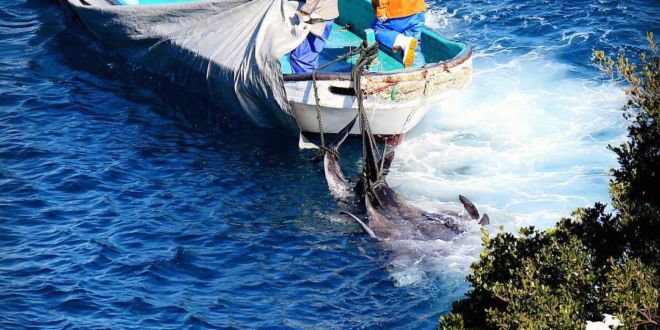 After two hours of searching for dolphins this morning, the hunters began driving a pot of 20 Risso’s dolphins towards the Cove. This frantic chase lasted about two hours. Trainers arrived with the hunters and selected two dolphins for a life in captivity.

The hunters killed the remaining pot members. As the skiffs towing dead bodies emerged from underneath the tarps, one of the dolphins began violently thrashing, tied to the skiff by its flukes, clearly still alive.

Each year from approximately September 1 to March 1, a large-scale hunt of dolphins takes place in the small village of Taiji, Japan, as made famous by the 2010 Academy Award-winning documentary “The Cove.” During this period, fisherman, or more appropriately, dolphin hunters, utilize drive hunt techniques to herd large numbers of dolphins to shore, resulting in their capture or death.

Dolphin Project is the only organization to have been on the ground in Taiji since 2003. Utilizing revolutionary live streaming, we document and broadcast the results throughout the course of the entire season in hopes of bringing this cruel practice to an end.

Share
Previous For some whales sonar provokes suicidal behaviour, finds major scientific study
Next ‘This is shocking.’ An undersea plague is obliterating a key ocean species