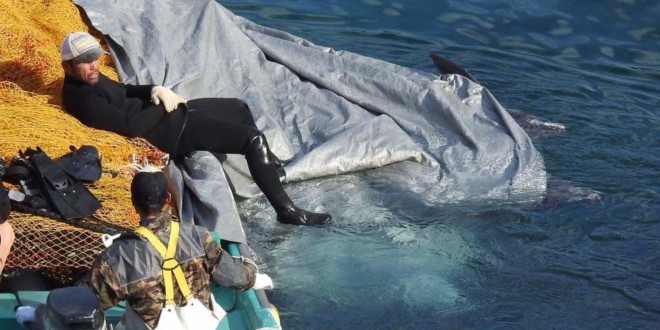 There was devastation at the Cove this morning, as the sixth pod of Melon-headed whales this season was torn apart.

Cove Monitors noticed the drive formation at about 8:40am as the boats emerged out of the sunlight, puffs of black smoke rising from them, as they chased the pod vigorously towards the Cove.

It was a very fast drive, and when the hunters had netted the Melon-headed whales into the Cove, these docile beings huddled together in complete shock and confusion.

We witnessed a few of the whales become entangled in the nets, panicking and battling for freedom, bleeding from their rostrums, whilst young juveniles clung closely to their parents. Soon after being forced under the tarps, a skiff emerged with 3 live juveniles struggling incessantly under a tarp, a hunter sat on top of them, pinning them down.

They were dumped at sea to fend for themselves, so they wouldn’t be counted as part of the fisheries quota.

Meanwhile, a lot of heavy breathing and thrashing was heard from the killing beach, as the rest of the family was brutally slaughtered.

Their dead bodies were then tied to skiffs and dragged out of the Cove, often appearing from under the tarp that was attempting to conceal them, then transferred to banger boats to be transported to the butcher house.

Due to the drive fisheries recent increase in quota from 100 Melon-headed whales to 200, the hunters had authorization to massacre these 27 individuals who were unfortunately migrating past Taiji today.

The juveniles who were dumped at sea are not included in this number, but they may also have little chance of surviving, now they’re without the care and guidance from their mothers and relatives.