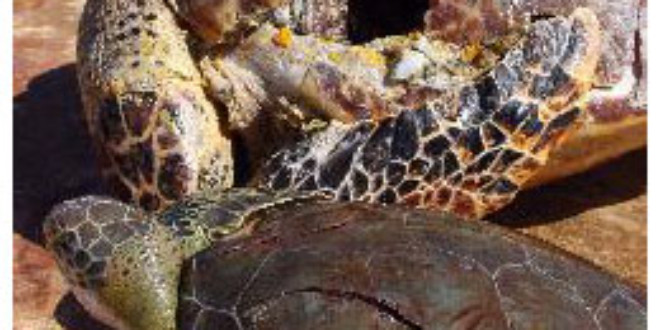 Shocking rise in number of turtles killed by boats

(From royalgazette.com)- More turtles have been killed by boaters in the past two months than in the whole of last year. Now Marine Police and conservationists are urging boat users to slow down and take extra care in areas close to shore where turtles feed in the vicinity of seagrass beds. Boaters are reminded that the speed limit within 100 yards of shore is five knots with no wake, although this is relaxed in some areas such as busy Hamilton Harbour and Ferry Reach.

Patrick Talbot, head aquarist at Bermuda Aquarium Museum and Zoo (BAMZ), said it was vital boat operators obeyed marine rules and regulations. He also urged people to avoid dropping trash and rope, fishing line or netting in the water, as turtle deaths due to entanglements are also on the rise.

“We don’t know whether this is due to more boat users on the water or a higher turtle population, but this is not a good trend,” said Mr. Talbot.

On Sunday, Marine Police recovered a dead turtle floating near Darrell’s Island. In the previous fortnight another two turtles were found. Police officers found a hybrid turtle in the shipping channel off the North Shore, while a smaller green turtle washed up on a beach at Spanish Point.

Mr. Talbot said: “The hybrid had a hole punched into its shell, so the force of the impact must have been quite great in order to put a hole in a shell of an animal almost three feet long.

“The turtle at Spanish Point was fairly small and so we think it was quite young. It was still foaming at the mouth – a sign it had just been hit by a boat, but it died soon after we got it.”

He said: “The other two turtles were found over a month ago.”

Marine Police have reported most boat collisions in the Paradise Lakes area and that the majority of turtles found have propeller slashes on their shells.

A Police spokesman said: “All boat users are asked to go slow, keep a sharp lookout for any semi-submerged turtles and avoid getting too close to these sea creatures wherever possible.”

Mr. Talbot, who manages the wildlife rehabilitation centre at BAMZ, said those turtles hit by boats suffer a painful death.

“These animals tend not to survive. They have entrails hanging out and are in a lot of pain,” he said.

“We do what we can for them but mainly when they get hit by a boat, there’s not much chance of survival.

“The injuries tend to be split shells but we’ve also had decapitations and flippers taken off. Mainly though, it’s the shell that gets hit first because that’s the highest point in the water.”

Mr. Talbot said: “It’s frustrating when a turtle is brought to us like this. They’re a good size so it’s very hard to miss these animals.

“These days boats are propelled by engines at high speeds and turtles are found close to shore, so this leads us to believe that many people are moving faster than they should in these areas, and are in places where they shouldn’t be.

“Within distance of shore, boats should be moving slowly enough that if a turtle pops its head up there is enough time for it to avoid the boat, or dive out of the way.

“I would just ask people to be mindful and to look out for areas turtles are known to frequent. Please obey the traffic laws, and hopefully we can reduce the number of collisions we are getting. In our opinion one collision is one too many.”

n Anyone finding a dead or injured turtle should take it to the staff at BAMZ. Contact BAMZ at: 293 2727.