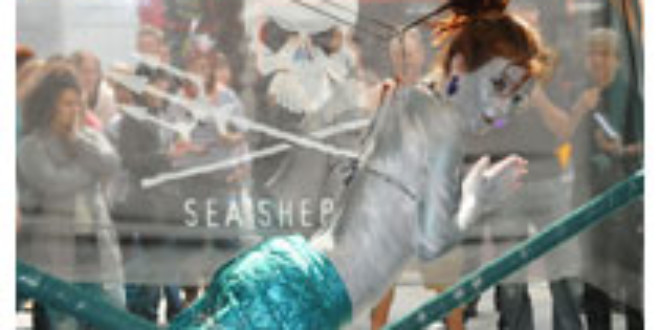 (From metro.co.uk)- A shark protester hung herself to the ceiling of a shop window with shark hooks pierced through her skin. A Lush spokesman said: “We are trying to change people”s perceptions about sharks as a lot of people still associate them with Jaws. “There was only one person killed by a shark attack in 2007, and yet we killed 100 million sharks for their fins last year, so we are clearly a bigger threat to them than they are to us.

“When they are caught the sharks are pulled from the water, their fins are sliced off, and they are kicked back into the ocean, so they sink to the bottom and suffer a slow death.”

“Fins are the most lucrative part of the shark, which explains the massive escalation in the numbers of sharks killed in the last few years.

“This campaign does not specifically have anything to do with the products that we sell, but as a company we are passionate about animal welfare issues.”