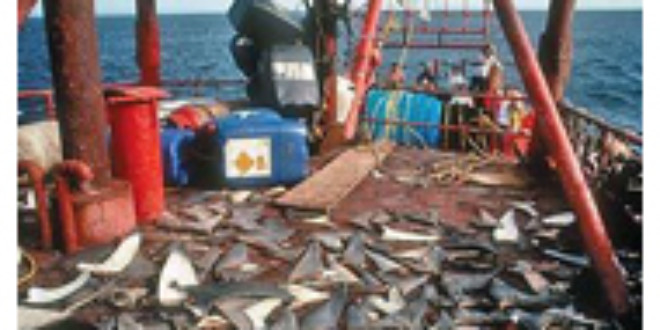 (From news.com.au)- The fairly innocuous-sounding, almost tasteless, and rather expensive so-called delicacy, shark fin soup, or fish wing soup in Chinese (the shark fin bit is conveniently lost in translation), supports ingredients of spectacular brutality that include serious fissures in the oxygen trade, ecosystem disruption and agonising death. In a devilish act of deceit the Government has banned shark finning but endorses “fin fishing”, which means although finning is not permitted in Australian waters, sharks can be separated from their fins onboard a ship, or the number of fins on board must equal the number of carcasses, and in all jurisdictions carcasses must be kept.

Domestic fisheries sell fins directly to local markets while exports and imports continue. One Brisbane restaurant advertises the now believed to be false claim that the dish is “world-renowned for its power to bring great feelings of well-being to all who experience this great Chinese delicacy”. A Sydney restaurant sells fin soup for about $39 while in Brisbane a single serve is about $21. But the soup ranges from $90 to $200 a bowl in Asian countries.

Without sharks the Great Barrier Reef will wilt. Global warming plus shark absence equals marine life mortality. Sharks play a pivotal role in the terrestrial oxygen exchange as they stabilise non-terrestrial ecosystems. Shark losses can lead to major restructuring of ocean ecosystems that in turn leave too many grazing fish that eat crucial phytoplankton, which fight climate change.

About 16 governments worldwide have banned shark finning but they have not banned imports.

In 2003, Costa Rica’s president asked the Sea Shepherd Conservation Society for help to cease its unbridled, sickening shark-finning plot with the Taiwanese fishing industry, and that went some way towards saving sharks.

And Australian marine groups are now calling on the Federal Government to preserve one of the world’s few remaining pristine big fish marine systems – the Coral Sea.

As expected, the Queensland Seafood Industry Association believes that is a “nonsense position”.

There are still many enemies to life on Earth, and the party of humanity that swaggers minus a single revolutionary idea or liberating bounce is booming. We need decision-makers who can save at least one whale and enact thumping resolutions that mitigate hot, dirty air. We have a date with fish; a relationship with the natural world.