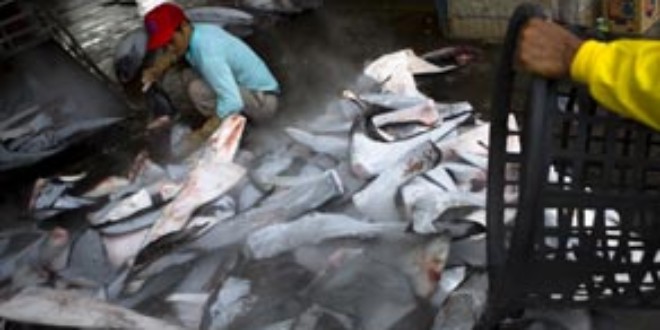 There is no animal on earth more vilified than the shark. Pop culture references and annual, over-hyped reports of attacks on swimmers or surfers have put sharks on the top of the list of the world”s most feared living things. There is however, a creature far more predacious than the shark: Humans.

Sharks existed before there were dinosaurs and they pre-date humans by millions of years. Yet, in a relatively short period of time, humans and their technological arsenal have driven most shark populations to the verge of extinction.

This is bad news for the world’s oceans. Sharks are the top predator in the ocean and are vital to its ecosystem. The rapid reduction of sharks is disrupting the ocean’s equilibrium, according to Peter Knights, director of WildAid International.

“These are ecosystems that have evolved over millions and millions of years,” said Knights. “As soon as you start to take out an important part of it, it’s like a brick wall, you take out bricks [and] eventually it’s going to collapse.”

When sharks attack humans, it inevitably makes news – it is a sexy story. What is rarely reported is that worldwide, sharks kill an average of 10 people every year. It’s usually when people venture into a shark’s habitat and not the other way around. By contrast, humans kill around 100 million sharks every year – a number that has ballooned in recent years because of the enormous demand for shark fins to make shark fin soup.

Shark fin soup is a delicacy reserved for the wealthy on special occasions and it has been part of Chinese culture for centuries. For years, only rich Chinese mostly in Hong Kong, Taiwan and Singapore consumed it, so the impact on the overall shark population was negligible.

Over the last decade, the exploding middle class in China has changed the fate of the shark. With an unprecedented number of people making more money than ever, the demand for all things that signal an improvement in status is gargantuan. The ability to serve and consume shark fin soup is among the most revered of activities, because it signifies that one has made it.

Shark fin soup can be expensive. A bowl of imperial shark fin soup can cost upwards of $100. These days, shark fin soup is so fashionable that it’s becoming commonplace. Buffets serve versions of it for as low as $10 a bowl. The irony is that shark fin is flavorless — its cartilage has a chewy consistency. Tens of thousands of sharks are being killed for a gelatinous thing in a soup.

To satiate the appetites of upwardly mobile Chinese, fishermen traverse all corners of the Earth’s oceans in search of sharks or, more specifically, their fins. Because space is limited on fishing vessels and shark bodies are bulky and not considered as valuable, fishermen often catch the sharks, saw off their fins and toss the sharks back into the water. Without their fins, sharks cannot swim and they sink to the ocean floor, where they’re picked at by other fish and left to die.

The “Planet in Peril” crew traveled with Knights to Taiwan’s southern port city of Kaohsiung, which is considered one of the world’s main hubs for shark fins. We watched as the fishermen unloaded their catch. Thousands of fins were thrown from one of the ships that had spent months fishing the international waters of the Pacific.

Because of the sensitivity over this issue, few people were willing to talk to us.

Shark finning is not illegal. Taiwan has no law against fins taken from international waters coming into its ports. However, Taiwan does have what it calls a “plan of action” that requires the bodies of the sharks the fins came from to be accounted for and not dumped into the sea.

But at this port, we see more fins than bodies as a forklift scoops up large piles of fins and dumps them into a truck. There are no signs of anyone monitoring the weight ratio or making sure there’s no illegal fishing of the five shark species protected under international treaty.

“The laws are weak and when you take the fins off, identifying these species is almost impossible,” Knights said. “You can see they all look almost identical and yet they’re makos and threshers and blue sharks; there [are] all kinds of species there, but identifying them and monitoring them and having a regulated fishery is virtually impossible.”

Taiwan is not alone. Shark finning thrives off weak regulations around the world and only a few countries demand that sharks arrive in port with fins attached.

Knights says it comes down to economics.

“The fin is one of the most expensive pound-for-pound item from the sea. And the beauty about the fin is that it’s very compact … it doesn’t take up your hull and you can make a lot of money from it,” said Knights.

Fins can sell for $500 per pound, according to WildAid, which is campaigning for a global ban on shark finning.

In recent years, Cocos Island has become another battleground in the fight to save the shark.

Located 300 miles off the coast of Costa Rica, the only way to get to this uninhabited islet in the eastern Pacific is by boat. Cocos Island, recently declared a national park, is a nearly pristine and richly preserved ecosystem where thousands of sharks have roamed for centuries. Scientists think there are more sharks there than any other place on Earth.

Fishermen come from all over the world to catch the sharks that swim around the island. It is illegal for fishing boats to get within three miles of the island, but the law is routinely ignored. On any given day, one can see numerous fishing boats no more than a mile away from the island.

The fate of the shark is grim. Increasing public awareness of the shark’s role in the marine ecosystem and the rapid rate of extinction because of the demand for shark fin soup may be the best hope for the shark, which has inhabited the planet for 400 million years.

“Can you imagine if it was Yellowstone Park and people were shooting up grizzlies? No one would ever get away with it. But this ocean, because it’s out of sight, out of mind, [shark finning] carries on,” said Knights.