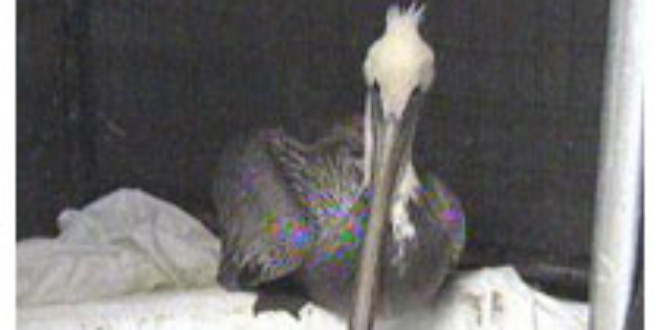 (From myfoxla.com) California- The Wetlands & Wildlife Care Center in Huntington Beach, which is caring for the lone  surviving pelican, has offered a $5,000 reward for information leading to the arrest of those responsible, said the center”s Debbie McGuire. All had broken wings. Another four were still alive, but three had to be euthanized and only one, a female about 3 years old, is still alive, McGuire said.  She explained the breaks would be the equivalent of a human with an arm broken from the elbow to the wrist. Anyone with information about the bird”s injuries was asked to call Special Agent Ed Newcomer of the U.S. Fish and Wildlife Service at (310) 328- 1516.

Bone protruded from the surviving pelican’s skin with three to four inches exposed from both wings, she said. The breaks run in the opposite direction than might be expected if it happened in flight, she said.

The dead birds were all younger and may not necessarily have a fear of humans, McGuire said, adding they were hatched on the more remote Channel Islands. The birds were discovered on Monday and Tuesday by lifeguards at Bolsa Chica State Beach.