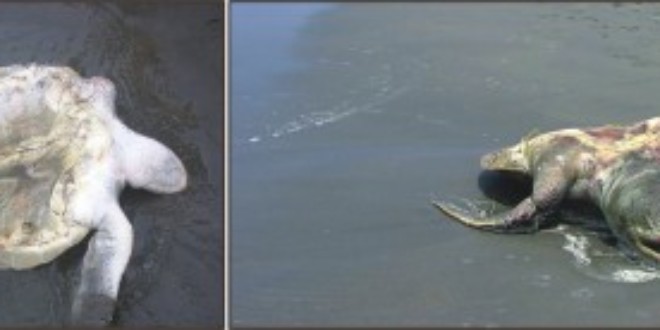 Hundreds of dead turtles are washing up ashore along the coastal lines from Cox”s Bazar to St Martin”s with bruises all over their bodies. Over 400 female dead turtles have floated ashore over the last two weeks alone, locals claim. Experts say that these turtles meet their death as they travel the stretch of nearly 120 kilometres from Sonadia Island in Cox”s Bazar to St Martin”s island to lay eggs on the shore.

The turtles get entangled in the fine fishing nets used indiscriminately by fishing trawlers. The fishermen, instead of releasing them back to the sea, beat them to death with sticks and dump their bodies in the sea, experts allege.

Their bodies are then washed ashore by the tide.

Some fishermen from Sonadia, preferring anonymity, has confirmed this saying it’s a hazardous task to release the turtles back into the waters.

Dead turtles are also being washed up to the shore at Sonadia, St Martins, Teknaf and Shah Parir Dwip coasts.

Two government and non-government organisations, working with sea turtles, have recovered 62 carcasses from Cox’s bazaar area over the past week. They have expressed concern about the situation and also the environmental pollution caused by such large number of carcasses.

At present dogs and jackals are feasting on the dead bodies. Some locals have also been burying the carcasses because of the foul odour.

Chairman of St Martin’s Union parishad Feroz Ahmed Khan said, the dead turtles started washing up to the shores from around the middle of January.

Rafiqul Islam, assistant director of the Directorate of Environment (DoE) for Cox’s Bazar and management officer of Coastal Swamps Bio-diversity Management Project, confirmed the situation saying they have recovered 30 dead turtles from the beach in just one week.

Coastal Swamps Bio-diversity Management Project and Marine Life Alliance have been breeding turtles in hatcheries by collecting turtle eggs from the beach for the last two years and also works on creation of a congenial environment for turtles’ egg-laying.

Director of Marine Life’s biologist Zahirul Islam said each year at least 1,000 sea turtles get killed when they come to Cox’s Bazar beach to lay eggs.

The officials said, the turtles get entangled in trawlers in deep sea who use “current” nets or “Bihingi” nets to catch shrimps.

Most of the turtles found in this area are of the “Olive Reedley” species. Each of these turtles weigh between 10 to 20 kg, are 63 to 70 centemetre in length and 60 to 67 cm in breadth.

The experts warn of an impeding environmental disaster that could be caused by the large-scale deaths of turtles as it causes an imbalance in the ecology of the area.

Islam said that the warm zones of the Atlantic, Pacific and Indian Oceans are the natural habitats of Olive Reedley turtles. Sometimes they are found in the Bay of Bengal as they come to the coasts only during breeding season to find mates.

Male turtles after they come out of eggs laid on the sandy beaches never return to the land during their lifetime. Only female turtles return to lay eggs during winter nights.

The fisheries department should take steps to save them, the biologist said.

A DoE district unit official, requesting anonymity, said though the fisheries department seizes banned nets near the coasts, the department is inactive in controlling the activities of trawlers out in deeper waters.