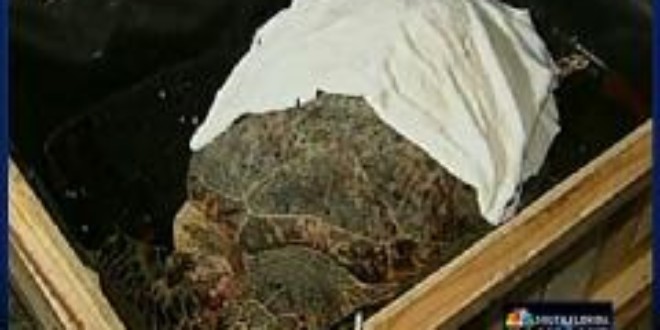 (From nbc6.net) Marathon, Florida- The right front flipper of an endangered hawksbill sea turtle attacked by wild dogs in the Virgin Islands, will require amputation, a veterinarian at the Florida Keys-based Turtle Hospital said Wednesday. Surgery to remove the flipper and additional wound treatment is scheduled for Thursday, according to Doug Mader, the hospital”s staff veterinarian, who volunteers his services. “The flipper is in bad shape,” said Mader. “There”s already a lot of dead bone.”

Complicating matters are screws, installed at a Virgin Islands’ animal hospital to hold the flipper’s elbow in place, that have pulled out, Mader said.

Following surgery, Mader said he would treat other wounds on the turtle, named “Sandy,” as a result of the attack that occurred while she was nesting on a St. Croix beach.

Mader said the turtle was in fair-to-good condition and a solid candidate to have the surgery. Although Mader expressed deep concern about the condition of the Sandy’s front left flipper, he hopes it might be saved.

Single-amputee turtles can learn to compensate for their physical challenge and survive in the wild, a hospital official said.