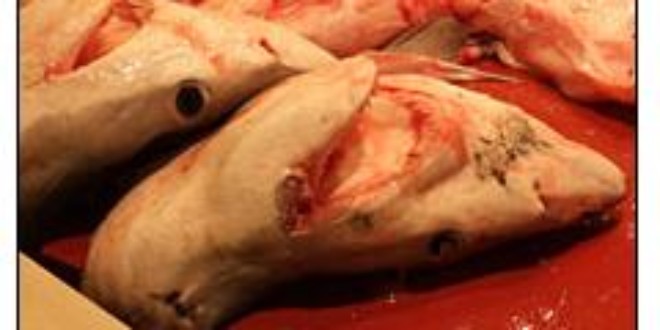 (From reuters.com) Washington- An international team of scientists wants to ban the catching of eight species of Atlantic Ocean sharks and put a strict limit on the catch of two others to try to prevent population crashes. Sharks are particularly vulnerable to overfishing because they reproduce and grow slowly, but there are currently no international limits on shark catch, according to the non-profit Lenfest Ocean Program, which convened a meeting of shark experts to study the problem.

The group found in a study released on Monday that 10 species of Atlantic sharks are at serious risk of being overfished.

Many of the world’s open ocean shark species are declining, in part because they get caught in long fishing lines meant to catch tuna and swordfish, the scientists said.

As the number of traditional target fish like tuna and swordfish declines, demand for shark meat and shark fins increases, said Charlotte Hudson of the Lenfest program.

Because sharks are global ocean predators that range from the east coast of the United States to the west coast of Europe, determining their numbers — and figuring out whether or how much they are decreasing — is a difficult task.

Shark experts from Australia, Belgium, Croatia, South Africa and the United States used available data on shark populations along with risk analysis to estimate which species were most at risk, Hudson said in a telephone interview on Tuesday.

“There are lots of fish in the ocean, but sharks are special because their biology allows them not to have as many babies a year, so that they reproduce much more slowly,” Hudson said. “Therefore, when you kill adults, you really reduce the population much faster, because you’re reducing the ability of the population to sustain itself.”

Their recommendations were aimed at the International Commission for the Conservation of Atlantic Tunas, known as ICCAT, whose members — including the European Union — are meeting November 17-24 in Morocco.

ICCAT mostly manages tuna populations, but conservationists and scientists see this organization as the only body that could impose Atlantic-wide restrictions on the taking of sharks in tuna fishing gear.