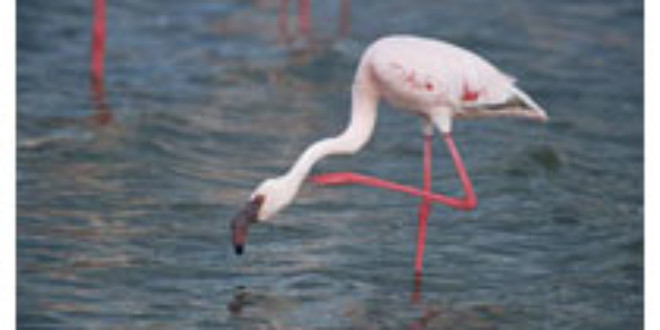 (From birdlife.org)- Three high-ranking scientists face disciplinary action and the loss of their jobs because of their work to save rare lesser flamingos in South Africa. All three were employed by the Northern Cape provincial government which has suspended them after discovering their links to a campaign to save Kamfers Dam, one of only six lesser flamingo breeding sites in the world. They had called for action to tackle pollution of the dam, which is being blamed for swollen joints and lesions on the legs of many of this year’s 9,000 lesser flamingo chicks.

Lesser flamingos are also threatened at Lake Natron in Tanzania where the government and Indian multi-national TATA want to export soda ash. Lake Natron, in the Rift Valley, hosts between 1.5 and 2.5 million lesser flamingos in summer, 75 per cent of the world population.

Duncan Pritchard, Acting Executive Director of BirdLife South Africa, said: “The action against Mark and his colleagues has bewildered and outraged conservationists throughout South Africa and beyond. Kamfers Dam is one of the best places in the world to see lesser flamingos and could have the greatest potential of all lesser flamingo nesting sites in Africa, and especially southern Africa, to help these birds start recovering their numbers. ”

Paul Buckley, an Africa specialist at the RSPB, which is backing the flamingo campaign, said: “Pollution and development are the most serious threats facing lesser flamingos in Africa. Safeguarding these birds at Kamfers Dam and Lake Natron is vital if we are to halt their serious and alarming decline.

“We applaud local conservationists who are working tirelessly and at great personal cost to endure these sites remain protected and undisturbed sanctuaries. If they do not, the future is bleak for this beautiful and emblematic species.”