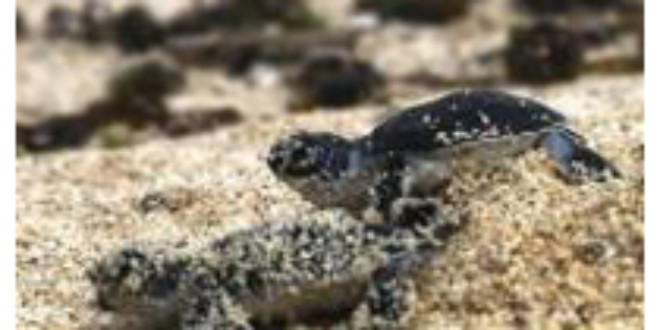 Artificial light that occurs at unnatural times or places – often called light pollution – can attract or repulse animals, resulting in increased predation, migrating in the wrong direction, choosing bad nest sites or mates, collisions with artificial structures and reduced time available to spend looking for food, just to name a few. In a classic example, baby sea turtles use the direction of star- and moonlight reflected off the water surface to help them find the ocean when they emerge from their beach nests; in urbanized areas, many turtles turn the wrong way and migrate toward the brighter lights of buildings or streetlamps.

“Environmental cues, such as the intensity of light, that animals use to make decisions occur at different levels of severity in the natural world,” explains Bruce Robertson, an ecologist at Michigan State University. “When cues become unnaturally intense, animals can respond unnaturally strongly to them.” That heightened response, he says, happens because of the way humans have changed the environment.

Smooth, dark buildings, vehicles and even roads can be mistaken by insects and other creatures for water creating “ecological traps” that jeopardize animal populations and fragile ecosystems. It’s the polarized light reflected from asphalt roads, windows – even plastic sheets and oil spills – that to some species mimics the surface of the water they use to breed and feed. The resulting confusion could drastically disrupt mating and feeding routines and lead insects and animals into contact with vehicles and other dangers, Bruce Robertson said.

In their study, lead author Gabor Horvath, Robertson and their colleagues explain that many animals are also thrown off course by light reflecting from man-made structures. The darker and smoother a surface is, the more highly polarized its reflected light. In most cases, artificial polarized light symbolizes one thing to animals.

“For example, the primary source of horizontally polarized light in nature is water,” says Robertson. “Biologists discovered in the 1980s that such polarized light is an amazingly reliable cue for finding bodies of water.”

Especially in the case of dragonflies and other insects, which often lay their eggs and spend their first phase of life in ponds, streams and lakes, mistaking human-made objects for water can be deadly. Horizontal, shiny, dark surfaces – such as dark glass surfaces of buildings, asphalt, dark-colored cars and black plastic sheeting – reflect horizontally polarized light that is more strongly polarized than that reflected by water, which augments the animals’ attraction to it. Polarized light pollution can disrupt the entire food web in an ecosystem: When insects mistake the sheen of an oil slick for water, their predators often follow the insects to the source and risk becoming trapped and drowning, as in the La Brea tar pits of Los Angeles and other oil-slicked lakes around the world.

Even in the absence of a physical trap, if the attraction is great enough, animals can’t remove themselves from a polarized light source, ultimately causing death from dehydration and exhaustion. For example, a dragonfly laying its eggs on a shiny black highway may become paralyzed by attraction to the pavement after laying its eggs, effectively dooming its fate and that of its offspring. These so-called ecological traps occur when environmental change happens more quickly than animals can evolve to react to it. If large numbers of animals fall victim to these false cues, says Robertson, it could cause populations to decline.