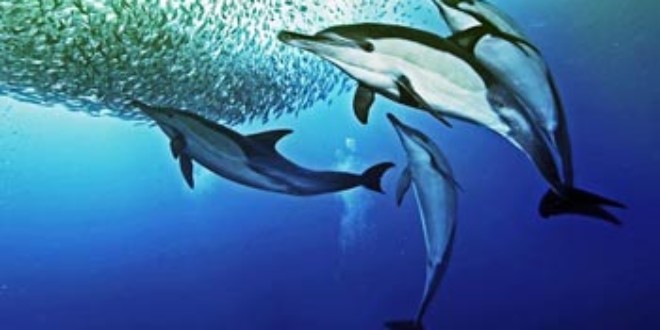 Mass strandings of dolphins and whales could be caused because the animals are rendered temporarily deaf by military sonar, experiments have shown. Tests on a captive dolphin have demonstrated that hearing can be lost for up to 40 minutes on exposure to sonar. Hearing is the most important sense for dolphins and other cetaeceans, and losing it is likely to cause them to become disorientated and alarmed.

The finding by the Hawaii Institute of Marine Biology may explain several strandings of dolphins and whales in the past decade. Most strandings are still thought to be natural events, but the tests strengthen fears that exercises by naval vessels equipped with sonar are responsible for at least some of them.

The study also suggested, however, that dolphins and whales would usually be able to swim away fast enough and far enough to escape any ill effects from sonar.

To induce deafness in the Atlantic bottlenose dolphin, Tursiops truncatus, the sonar device would have to be loud, close and would need to last for at least two minutes.

This should give the animals plenty of time to escape but in some circumstances noises can be caught in “underwater sound traps”, Aran Mooney, of the University of Hawaii, said.

Sound can become trapped if a layer of warm water lies over cold water. When sound created in the warm zone reaches the cold water it can bounce back instead of travelling though it. This, Dr Mooney said, would have the effect of trapping the sound in the warm layer, where it would bounce around “like a ping-pong ball”, giving whales and dolphins little chance of escaping it.

Similar effects could be experienced in parts of the sea with mountains and ravines, where the sound would bounce back and forth.

Dr Mooney said that this could explain three of the best-known strandings that have been linked to military sonar – in the Bahamas, the Canaries and Hawaii – because all three regions had a mountainous underwater topography.

Sound traps might also go some way to explaining why there are only a few mass strandings compared with the frequency with which sonar is used by navy vessels.

“The big question is what causes them to strand,” Dr Mooney said. “What we are looking at are animals whose primary sense is hearing, like ours is seeing. Their ears are the most sensitive organ they have.

“What we found was if you play sound you can cause temporary hearing loss. The sounds have to be surprisingly loud and they have to be repeated over an extended period of time – two to three minutes.

“In that time you would expect them to swim away as fast as possible. They have to be within 40 metres of a ship, but when you have certain oceanographic conditions it’s hard for the animals to get out of the way.”

Observations by researchers while carrying out the tests, which are reported in the journal Biology Letters, showed that even though the dolphin involved was well accustomed to man-made noises and disturbances, it suffered subtle behavioural changes, which could cause further confusion.

(From timesonline.co.uk, by Lewis Smith)