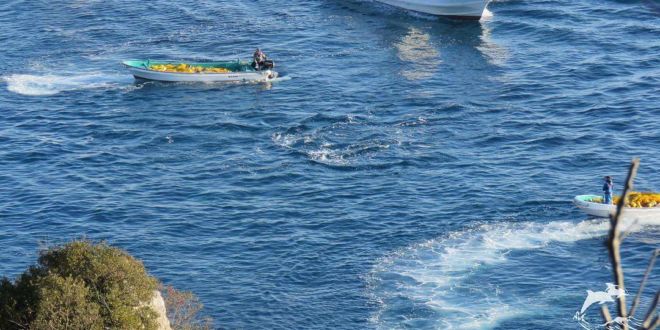 A family of 8 Risso’s dophins (Grampus griseus) was destroyed in the Cove this morning. Six members were slaughtered and 2 juveniles were taken captive for a live of tricks for food to entertain us.

Banger boats congregated and started driving the pod towards Taiji.

Being acoustically sensitive, these sounds are terrifying to the pod. The mothers gather their calves and elders together and begin to flee, swimming as fast as possible in the direction that leads away from the sounds. Adult and juvenile pods would dive deeply to escape, however the young calves cannot yet hold their breath for so long. Elders would also have a difficult time keeping up. With the pod committed to staying together, they slow down, ensuring everyone is accounted for. Every time the pod surfaces, the boats creating the wall of sound are waiting for them. They continue to swim away from the sound, however after being pursued for hours, the nursery pod is forced into a cove, and a net is dropped into the water from behind.

The pod, never having encountered a net, attempts to use echolocation to try to figure out what the net is. They swim tightly together, mothers and their calves, and elders beside one another. Soon, other boats come directly towards the dolphins, creating loud noises and lots of bubbles. The terrified Risso’s dolphins are forced closer and closer towards the shore.

Humans try to separate the mother and calf pairs. Amidst loud and frightening sounds, its mother desperately tries to get back to her calf, pushing straight over the net. Ropes are thrown out and tied around the flukes of the larger dolphins as they are pulled onto a beach. Other dolphins are wrestled into nets, pinned against the side of a boat and taken away, never to be seen again.

This morning, two Risso’s dolphin were chosen for “life” in captivity. For these unfortunate souls, a life of complete dependency on humans were about to begin, their freedom lost forever.

Trainers who supposedly love dolphins are happy to choose the ones they want, yet turn their backs on the others, knowing full well they will be slaughtered. In Taiji, trainers and hunters work hand-in-hand, with both groups under the tarps as the killing commences. This isn’t love. This is business, and cold, hard profit.

Be a voice for the voiceless:  TAKE ACTION