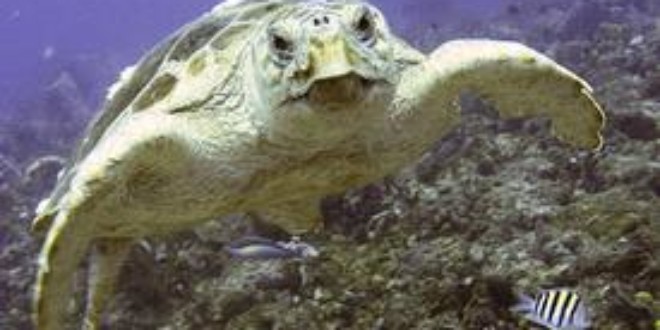 A coalition of conservation groups has notified the National Marine Fisheries Service of its intent to file a lawsuit as early as March if the agency does not act immediately to protect imperiled sea turtles in the Gulf of Mexico. The action comes after fisheries observer data showed that the Gulf of Mexico bottom longline fishery, which harvests reef fish like grouper and tilefish, resulted in the capture of nearly 1,000 threatened and endangered sea turtles between July 2006 and the end of 2007.

The coalition urges that the commercial bottom longline fishery be suspended until the federal agency meets its legal obligations under the Endangered Species Act to ensure that the fishery does not imperil sea turtles and other threatened species in the Gulf of Mexico.

All six species of sea turtles occurring in the United States are protected under the Endangered Species Act.

Even though the fishery has far exceeded the number of turtles it is allowed to take under the Endangered Species Act, the Fisheries Service, has declined to close the fishery while it studies options for reducing turtle take, a decision the conservation groups claim is illegal.

“Allowing this fishery to continue to kill threatened and endangered turtles while the government studies the problem is irresponsible and illegal,” said Andrea Treece, an attorney with the Center for Biological Diversity.

Loggerhead sea turtles are of greatest concern to the groups because this species accounted for 799 of the 974 captured turtles in the government analysis. This is more than three times the number of loggerheads the Service authorized the fishery to take in 2005.

Loggerhead nesting populations in Florida have dropped by 41 percent over the past 10 years. The groups say the large number of juvenile and reproductive adult turtles injured or killed by the bottom longline fishery is likely contributing to this steep decline.

“It’s devastating to think about all the hard work and progress we’ve made safeguarding Florida’s loggerheads and their nesting beaches being destroyed by this rampant level of take,” said David Godfrey, executive director of the Caribbean Conservation Corporation based in Gainsville. “We must stop and reassess the impacts of this fishery before it’s too late.”

The Gulf of Mexico bottom longline fishery operates primarily off the west coast of Florida, an area that provides key habitat for several sea turtle species, including loggerhead, Kemp’s ridley, and green turtles.

Bottom longliners lay a mainline up to 10 miles long with as many as 2,100 baited hooks. Sea turtles are caught when they attempt to eat the bait or become entangled when swimming near a line.