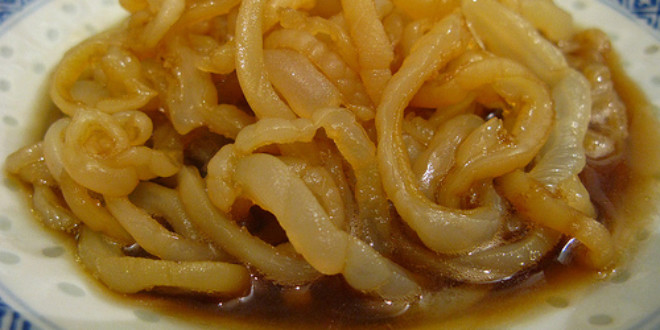 Scientist and author Daniel Pauly says that we have caught most of the big fish, and now we are actually starting to eat the bait. Squid was just bait a while ago and now it”s on our plates and we call it “calamari”. Eating jellyfish may have seemed like a joke, but now it”s reality. What we are seeing is a depletion of smaller species as we “fish down the marine food – web” or rather, eat our way down the fish food web – Ed.

It is difficult not to be a pessimist about fisheries, writes Daniel Pauly. Global marine catches, which had increased rapidly since World War II, stalled in the late 1980s then began a decline which will be difficult to halt.

This decline is due to an immense, sophisticated technology being thrown at dwindling fish populations and to an increasing demand, driven by increased human population and incomes. The declining supply has been so far masked in the developed world, in part, by the availability of certain seafood products not previously available, such as farmed salmon, and by massive fish imports from developing countries.

Overfishing, however, is occurring in the developing world as well, and thus fisheries, globally, are due for wrenching changes in the near future.

One clear indication of this is ‘fishing down the marine food web’, the increasing tendency of fisheries to land fish and shellfish from the bottom of marine food chains, often the prey of the larger fish previously targeted.

Fishing down marine food web provides low quality substitutes for the high quality fish we were accustomed to, and will inexorably lead us toward catching plankton, especially jellyfish. Yes, jellyfish, which are now turning from a specialty consumed around East Asian Seas into a product that is caught in the Atlantic as well, and exported across continents.

The fishing industry is, on its own, incapable of turning the ‘fishing down’ trend around, notwithstanding commentators who should know better than argue that all is well. One of these is the now discredited Bjørn Lomborg, who in his ‘Skeptical Environmentalist,’ implied from increasing global catch figures reported by the Food and Agriculture of the United Nations (FAO) that the underlying ecosystems must then be in good shape.

However, we now know that the apparent increases of global fisheries catches in the 1990s were due to China massively over-reporting its catches to the FAO. And we also know that catches can remain high (and in fact usually do) when stocks collapse, as illustrated by cod off Eastern Canada, which yielded good catches until the fishery had to be closed because there were literally no fish left.

But excessive catches are not even the whole story. Many of the fishing gear used to catch fish – bottom trawls foremost among them – literally tear up the habitat upon which these fishes depend. Quite a strange way to run a fishing operation, if you stop and think about it! Small wonder that some of the stocks exploited in this manner do not seem to recover.

Is aquaculture a solution?

Aquaculture, the farming of fish and other aquatic organisms could in principle help overcome the shortfall. However, the word ‘aquaculture’ covers two fundamentally different kinds of operations; let’s call them Aquaculture A and B.

Aquaculture A, devoted to the farming of bivalves such as oysters or mussels, or to freshwater fish such as carp or tilapia, relies on plants (plankton in the sea, or in ponds, sometimes supplemented by agricultural by-products in the case of freshwater fishes) to generate a net addition to the fish food supply available to consumers. Moreover, because Aquaculture A is based predominantly in developing countries (mainly in China, but also in countries such as the Philippines, Bangladesh), it supplies cheap animal protein right where it is needed.

Aquaculture B is the farming of carnivorous fish such as salmon or seabass, and increasingly, the fattening of wild caught tuna.

Salmon, seabass, or tuna eat flesh; they are, ecologically speaking, the wolves and lions of the sea. When fed only vegetable matter, e.g., soy meal, salmon do not grow well, and end up looking and tasting like tofu. As for tuna, there is no point even trying to feed them with anything but fish.

What this means is that the more of aquaculture B is done, the less cheap fish such as sardine, herring, mackerel and anchovies there will be for humans to buy and eat. Aquaculture B does not reduce the pressure on wild stocks: it increases it. It has led to massive imports, by developed countries, where Aquaculture B predominates, of meal from fishes caught and ground up in developing countries.

We won’t elaborate on the coastal pollution and diseases emanating from the uneaten food and feces of operations that match floating pig farms in all their major features.

One reason why the practitioners of Aquaculture B can get away with all this is that the public at large assumes their operations to be similar to those of Aquaculture A, and to add to the global fish supply. Let’s keep the differences in mind when we evaluate ‘aquaculture.’

There is still time

There is still time for fisheries, but only if they are reinvented not as the source of an endlessly growing supply of fish for an endlessly growing human population, but as provider of a healthy complement to grain-based diets. Particularly, fisheries cannot remain a free for all for a pillaging distant water fleet; they can however, become a regular source of income for communities whose members act in accord with the finite nature of marine resources. One key element of such reinvented fisheries will be their smaller size, and their reliance on fishes moving out of marine reserves, the protected ocean areas that we must establish if we are to allow marine ecosystems and the species therein to rebuild some of their past abundance, and to share this with us.