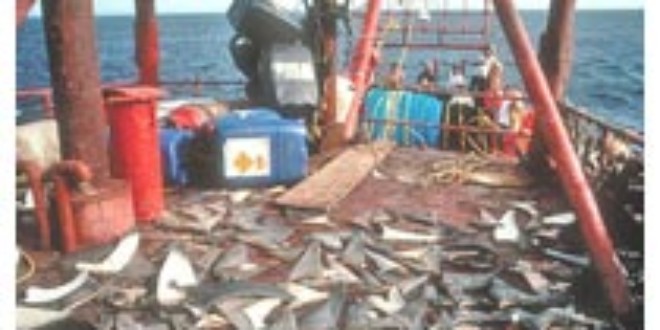 (From 2.journalnow.com)- Several factors help explain why the shark population has declined in the Mediterranean, Ferretti said. Fishing vessels are focusing on them to meet the Asian demand for shark-fin soup, he said, while simultaneously trying to compensate for the fact that they have depleted other fisheries. Another team of researchers found that in the open ocean, sharks that used to be an inadvertent bycatch for vessels looking for tuna and swordfish are increasingly being targeted for their meat and fins. Sonja Fordham, a co-author of their paper in the journal Aquatic Conservation Marine and Freshwater Ecosystems, said that pelagic sharks, which regularly cross vast oceans, face heightened pressures because there are no international catch limits.

“Some fishers have decided to switch to sharks because they cannot make up their product with bony fish,” he said, noting that the presence of so many countries bordering the Mediterranean has contributed to the fishing pressure there.

“Even though these are wide-ranging and fast-moving sharks, they are at risk,” Fordham said in a phone interview from Brussels, Belgium, where she advocates for tighter European shark-fishing regulations as the director of the shark-conservation program for Ocean Conservancy, an advocacy group.