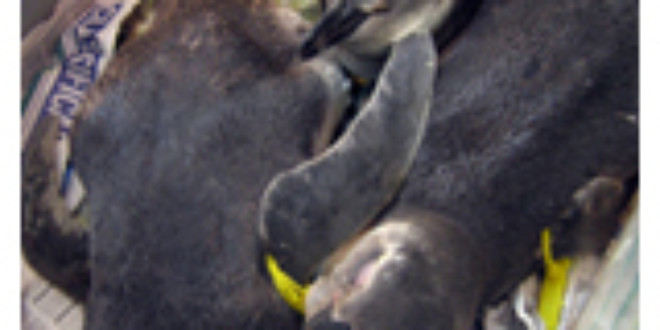 (From mcclatchydc.com)- No one has yet conducted a formal study of the phenomenon, but Brazilian scientists also blamed human activity for throwing off the penguins” migration. Some said a recent oil spill off the coast of Uruguay might have wiped out fish populations there, forcing the penguins to search farther north for food. Others suggested that melting ice in Antarctica had strengthened the northbound Malvinas ocean current this year, trapping younger, more vulnerable penguins. The discovery of hundreds of young penguins washing up along the Brazilian shoreline over the past month has sparked a scientific mystery over what may have led the birds thousands of miles astray.

The so-called Magellanic penguins began appearing in late June. Many of them dead or barely alive, they arrived on beaches all over southeastern Brazil about 2,500 miles from their native southern Patagonia. Some of the penguins have since been spotted as far north as the warm-water beaches of the Brazilian state of Bahia, another 600 miles up the Atlantic coast.

Although the penguins regularly migrate up to southern Brazil in search of food, the sheer quantity of penguins washing up farther away than normal has prompted worries that human activity may be throwing off the animals’ migratory cycle.

“The penguin population is intimately linked to their supplies of food, so this suggests something is happening to the population of fish they eat,” said biologist Marcelo Bertellotti at the National Patagonic Center in Puerto Madryn, Argentina.