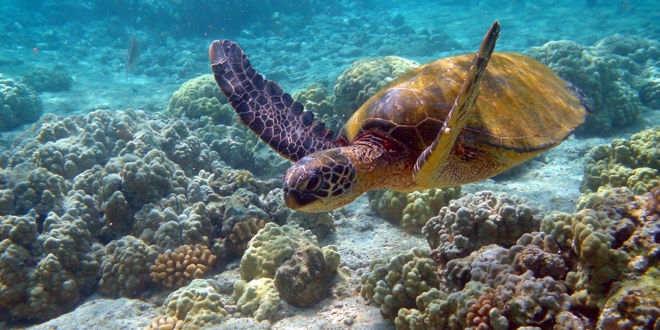 Adult green turtles are unique among sea turtles in that they eat only plants; they are herbivorous, feeding primarily on seagrasses and algae. Green sea turtles under threat everywhere from over-harvesting of both eggs and adults, and from accidental mortality in the nets and long-lines of fishing fleets. Green turtles are also threatened, in some areas of the world, by a disease known as fibropapillomatosis (FP). Other threats include loss or degradation of nesting habitat from coastal development and beach armoring, disorientation of hatchlings by beachfront lighting, nest predation by native and non-native predators, marine pollution and debris and boat strikes. The species is described as ”endangered” by the World Conservation Union (IUCN).