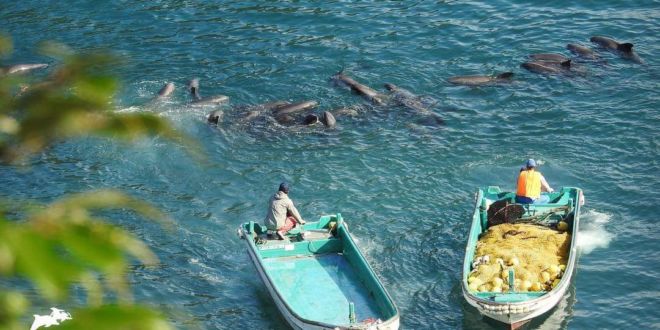 The gates of hell are still open in Taiji: melon-headed whale family devastated

A pod of 85 melon-headed whales was driven into the Cove, just after 9am today. In a panic, the majority of the pod beached themselves underneath the tarps, and thrashed in the shallows, while the hunters proceeded to slaughter each individual.

A short time later, the inner net was lifted and the 27 dolphins, which were still swimming in front of the tarps, were driven back to the outer area of the Cove.

58 dead bodies were towed out of the Cove by skiffs, and during a transfer of bodies to the banger boat, one dolphin was still alive, and thrashed amongst the carcasses of its pod. This dolphin was then dragged back to the Cove by its flukes, hidden underneath a tarp, so that the hunters could make another attempt to severe it’s spinal cord; this is official Taiji dolphin drive killing method, which government officials claim to be “humane”.

After almost 4 hours of being trapped in the Cove, witnessing firsthand the slaughter of their pod, the remaining 27 dolphins were driven back out to sea.