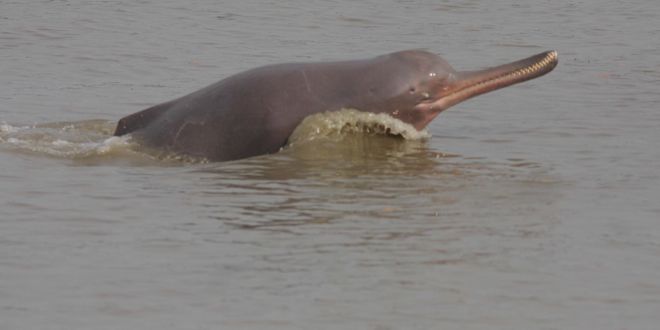 The Ganges River dolphin, or “susu”, inhabits the Ganges-Brahmaputra-Meghna and Karnaphuli-Sangu river systems of Nepal, India, and Bangladesh. The reduction in population size continues, and its causes have not ceased. More barrages are planned and under construction, habitat quality is expected to deteriorate further, mortality primarily from fishing gear entanglement but also hunting continues in some areas, and range continues to contract. The downstream effects of at least ten dams and barrages constructed in the Ganges mainstem and tributaries have severely reduced and fragmented dolphin habitat. Pollutant loads in South Asian rivers are increasing and can be expected to continue to do so with industrialization and the spread of intensive agricultural practices facilitated by irrigation with river water. The extraction of river water and siltation from deforestation are also degrading the species’ habitat. In some cases, habitat alterations have resulted in the genetic isolation of dolphin populations. Bycatch in gillnets and line hooks is also a major source of mortality for this subspecies. The species is described as ”endangered” by the World Conservation Union (IUCN).