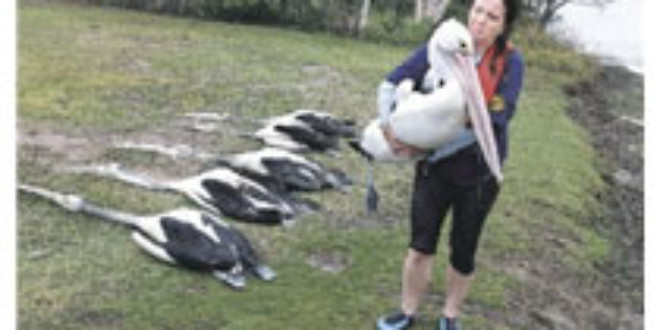 (From theherald.com.au)- Five pelicans and an albatross have been found dead in Tuggerah Lakes, sparking fears that the lake is turning poisonous. The alarm was sounded on Monday afternoon by a member of the public who alerted the Australian Seabird Rescue Unit that dead seabirds had been found near the North Entrance boat ramp. With help from the Tuggerah Lakes Coastal Patrol, Australian Seabird Rescue co-ordinator Jo Sealy scoured the area for the dead birds. Ms Sealy said she believed the deadly bacteria botulism was responsible for their deaths. “The bacteria is growing on the weeds in Tuggerah Lake,” she said. “The fish eat it and then the pelicans eat the fish. This is how the birds are getting sick.” The deadly bacteria grows in decaying plant or animal matter and in stagnant pools of water. Ms Sealy said she feared more birds on the lake were in peril. “I could go around the bay now and probably find another five dead pelicans,” she said.