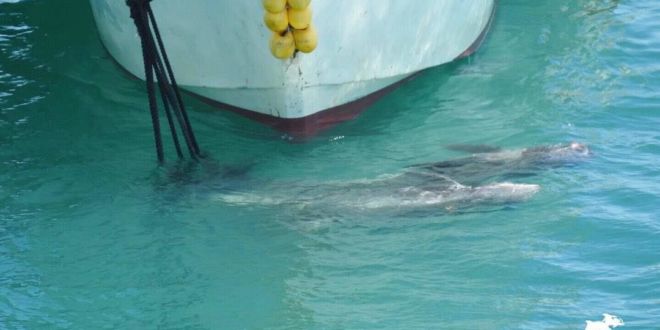 Five Risso’s dolphins were killed on Monday. One by one, their thrashing ceased as the pod were slaughtered.

On September 3, fishermen began driving a pod of dolphins towards Taiji. The pod appeared to be quite large at the beginning of the drive but only 6 of them were driven in, so the rest presumably escaped the boats. The trainers and hunters could be heard on the beach talking and laughing during the capture process.

Today another pod of bottlenose dolphins was driven into the cove. There were 7 lives stolen for the captivity industry and the rest of the family was pushed back out into the ocean. Animals caught alive and sold to marine parks fetch a high price (as much as $152,000 USD each, that’s why fishermen try to capture the nicer individuals. The captivity industry drives the dolphin slaughter. Thus, the best way to end the slaughter is to no by a ticket to a dolphin show.

Why are killing the rest? There are several reasons, but there is shocking aspect to the dolphin hunt. They hunt them “as a form of pest control”. The dolphins eat too much fish, and the fishermen are simply killing the competition.

Dolphin Project is the only organization to have been on the ground consistently since 2003 and will continue to document and live stream for the duration of the hunting season.

Please follow them on their social media channels for live updates.