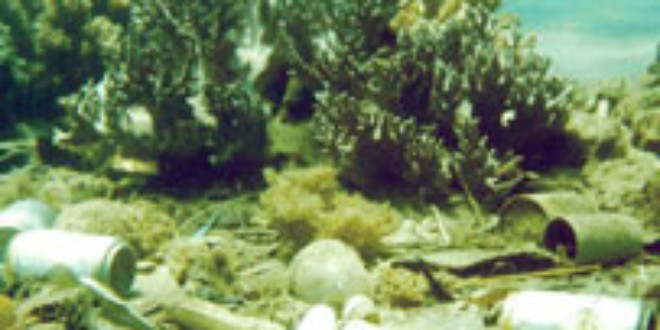 Vietnam’s ecological diversity is disappearing before our eyes as farms, factories and pollution destroy vast swaths of coral reef and mangrove forests. Around 80 percent of coral reefs in Vietnam have been damaged by over-exploitation and pollution, according to the General Department of Sea and Islands.

Coral reefs have been exploited across the central coastline from waters off Nghe An Province through Quang Binh, Thua Thien-Hue, Quang Nam, Quang Ngai, Khanh Hoa and Ninh Thuan provinces.

It takes hundreds of years for a coral reef of only one meter in diameter to form.

But it takes only one fishing boat or one load of dumped waste to damage an entire reef.

And as coral creatures such as lobsters, holothurians, hawksbill turtles and various fish reap big export profits, ecology is taking a back seat to commercialism.

Vo Si Tuan, deputy head of Vietnam’s Institute of Oceanography (IO), said that the overexploitation of coral in Vietnam had begun to tip delicate natural balances in the ocean.

Spined starfish, which consume coral polyps, are now growing to out-of-control numbers as their predators had been overfished, said Tuan. Consequently, the starfish have been eating more coral in a downward spiral of eroding maritime habitats.

Companies are also plucking stony corals out of their ocean environments to produce lime and cement, according to the Institute of Oceanography.

Additionally, fishing boats and divers have been plundering the reefs for a variety of snails providing materials for fine arts production. The food, cosmetic and textile industries have been pillaging coral seeking the benefits of carrageenanrich seaweed.

In another major problem, deforestation along the coast has pushed freshwater and soil into reefs, further damaging the coral.

Several coral species have actually died out due to the dumping of household, industrial and agricultural waste, according to the institute.

But experts at the Nha Trang Bay Marine Protected Area Authority have said that the institute’s sea-life breeding facilities, more than 6,000 aquaculture raft cages installed along the coast, are actually making things worse by contaminating areas with chemicals, food and waste.

As Vietnam is a member of a United Nations project on reversing environmental degradation in the East Sea and Gulf of Thailand, government experts have drafted a plan to protect the country’s coral reefs through 2015.

Nguyen Tac An, former head of the IO, said coral reefs provide people with food and protection against natural disasters. He said mangrove forests do the same as they provide coastal communities with protection against floods and erosion.

“But these ecological systems are serving these purposes less and less these days,” said An.

For more than 60 years, Vietnam’s mangrove forests have been destroyed by wars and illegal logging, as well as farming, housing and infrastructure projects.

The total area of mangrove forests across the country is a narrow 155,300 hectares compared to some 255,000 hectares in 1990, said Nguyen Chu Hoi, deputy director of the General Department of Sea and Islands.

The loss of mangrove forests also increases the risk of land being salinized and water being polluted, he said.

Dykes that could be built in place of the forests could cost more than US$10 billion and no one can be sure that they will work, said an IO’s expert.