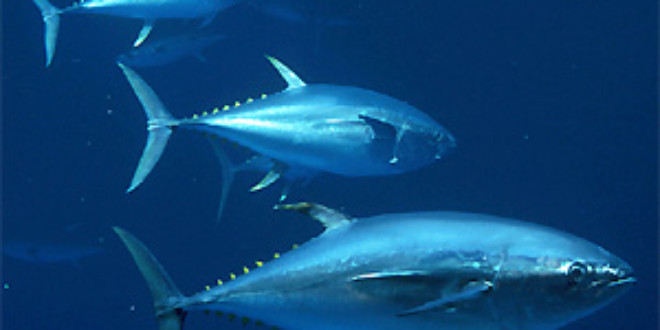 Bluefin tuna faces a devastating future and a devastating future for a species means an uncertain future for all of us. The increasing voracious appetite for sushi and sashimi, the greed and the lack of a governmental organisation able to claim responsibility for it is taking the bluefin tuna to a point of no return. The population of the species has been decreasing for years due to overfishing, progressive fattening operations, the lack of management of the fisheries and the uncontrolled illegal fishing.

In response to a decrease in the catch of Atlantic bluefin tuna, Thunnus thynnus, members of the International Commission for the Conservation of the Atlantic Tunas (ICAAT) divided the North Atlantic by the meridian 45º W, thus separating two different bluefin tuna populations (western and eastern) according to their spawning route out of the Gulf of Mexico or the Mediterranean Sea respectively and with separated quotas.

The population of Atlantic bluefin tuna nowadays is considered as an endangered species according to the International Union for Conservation of Nature (IUCN). This means that the biomass of adult population has decreased by 90%.  Scientists of the ICCAT, the supposed organisation “responsible” for the conservation of tuna and related species in the Atlantic Ocean, recommended  the ban on fishing during the November 2009 meeting in Reciffe, Brazil, given such an impoverished biomass. However, despite being faced with a predicted commercial extinction, the organisation rejected a quota reduction to zero and instead set a catch of 13.500 tons for 2010.

According to its website, this corrupt commission is also “responsible” for “accidentally” capturing others fish species, especially sharks. Labelling specific and intensive shark fishing as “accidental” is nothing but another blatant horror which exposes its lack of ethics and species conservation by this organisation, which was created for the sole purpose of protecting its member states’ interests and those of their fishing fleets. This supposed conservation body has systematically set the recommended catch established by its own scientific committee at twice as much as previously set. With this action, they are allowing the illegal catch of four times the quota. For example, the 2002 quota for western and eastern Atlantic bluefin tuna was established at 32.000 tons. However, the amount caught was between 50.000 and 60.000 tons due to poor monitoring capability and lack of sanctions.

Aware of this dangerous overfishing, Mediterranean countries with Community fishing vessels liable for overexploitation of the eastern Atlantic bluefin tuna (most notably Spain, France, Italy, Malta, Cyprus and Greece) rejected in October a proposal by Monaco. This proposal insisted on the inclusion of this species into the Appendix 1 of the Convention on International Trade in Endangered Species of Wild Fauna and Flora (CITES), the only global organisation with enough authority to limit or prohibit its trade.
In addition to the tuna seine fleet, there is the tuna trap quota. Apparently, what was meant to be a highly subsidised “traditional” fishing for local supply, turned out to be a dangerous business: Andalusian trap tuna goes almost entirely to meet the demand of the Japanese market.

In 2009 the coastal areas of Barbate, Tarifa and Conil urged the government to increase the quota of tuna fishing established at 1.088 tons by the EU as well as the promotion of this type of fishing to ensure the continuance of about 400 jobs!

Could a job take priority over the survival of a wild species?

In the following table we can see the large amount of bluefin tuna that is assigned to tuna trap compared to others fishing gears. However, it is considered small-scale fishing.

The alarming auctions in Tsukiji market in Tokyo, in which bluefin tuna prices can reach 173,000 dollars, only serve as a motivation to corrupt governments and unscrupulous fleets and traps to continue with this speculative business. The probable bluefin tuna extinction is predicted as there is no will to implement regulation, quotas or sanctions. Nor are there organisations able to properly manage this fishing.

Speculation on the last survivors of this species has been carried out for years. Companies such as Corporation Mitsubishi and Taiyo are buying and freezing as much bluefin tuna as they can. This action is clearly an investment in the extinction of this species. This was in a report by Roberto Mielgo.

Bregáis, an analyst for the tuna industry, states that Japan has collected 47.000 tons of tuna. This is a strategy which anticipates the rise in prices once the species becomes commercially extinct. We are faced with a short-term lucrative and criminal business which blinds governments, fisheries and restaurateurs’ common sense.

It is estimated that more than 50% of the annual Eastern bluefin tuna catch is illegal (it represents 63% more than the recommendation made by the scientists). This number is fatally getting worse due to the recent popularity of “aquaculture” operations in the Mediterranean Sea.

Bluefin tuna aquaculture in the Mediterranean Sea began in Andalusia, Spain, in 1985. Since the nineties, 11 Mediterranean countries (including Portugal) have been engaged in the intensive catch of young wild tuna to its fattening and subsequent sale to Japan, thus provoking a fatal decrease of the population. Many of the fish farms in Italy are controlled by the mafia, giving us an example of the magnitude of this criminal business.

The main capture area where these alleged “aquaculture” operations take place is located in the Mediterranean Sea (73 % of the total catch). This activity is motivated mainly by the Japanese market  which accounts for 90 % of the demand. While quotas for tuna catch do exist, regulation on wild tuna catch for fattening does not.

Unlike real aquaculture, which requires raising of the fish from spawn, the supposed bluefin tuna “aquaculture” in the Mediterranean Sea consists only in capturing wild tuna. These captures are made by using planes for sighting together with GPS and sonar technology which make it possible to locate tuna shoals, without leaving any escape route to the animal. Once a smaller vessel joined to a seine vessel receives co-ordinates, it throws bait overboard to attract them towards itself. When the vessel is close enough to the seine ship, a net is extended around the shoal and the animals are forced to enter floating cages with a capacity of 150 tons. These cages will be subsequently tugged to the farms, where tuna will be fattened until they reach the size and weight to be sacrificed to human consumption.

Serious consequences for the population of wild bluefin tuna

First of all, given that the only requirement is the transfer of live tuna into cages, seine vessels do not need to lead the catch to land. This practice has caused a dramatic increase in illegal, non-declared and non-reported catch. Anyway, tuna not intended for fattening is transferred to floating cages called “hotel cages”. Its modern technology, based on a glazing process with water, makes it possible to freeze tuna at very low temperatures (-60º) for its immediate dispatch to Japan.

Bluefin tuna fish farms are one of the main responsible for the overfishing of juvenile pelagic species which are turned into flour or oil to serve as the staple food for farm tuna. Thus, these fish farms are not only a serious threat to wild tuna (captures of potentially reproductive specimens), but also to vulnerable juvenile species. Between 4 and 11 kilos of smaller species are required to produce 1 kg of tuna, which has to be fed up to three times a day.

These activities, which are heavily subsidised, not only will lead to the extermination of the bluefin tuna but also to that of minor species such as mackerel or sardine among others, as well as species which are high up on the trophic chain such as dolphins and whales, which depend on this minor species for its survival.

Serious consequences for the ecosystem

Another serious problem caused by these activities is the potential environmental degradation in the area around farms. The intense activity generally produces a large amount of organic waste in the form of excess food, excretion, supplied antibiotics and dead tuna. Sediments gather in the seabed under the farms, with the possibility of forming dead zones and seriously altering the surrounding ecosystem. They also are important sources of parasitic diseases which can be passed on to other wild species.

These farms have a high additional cost in the environment. The massive confinement of fish represents an irresistible attraction to wild marine fauna such as birds, dolphins, porpoises and other predators. For example, in the fish farms of Scotland, farmers kill around 3.500 seals each year as a legal way of controlling predators. Apart from this, we have to take into account the mortality of dolphins and porpoises, which are trapped in seine nets, many of them non-reported.

If these kinds of activities and fishing are promoted and subsidised, the marine ecosystem and marine species which compound it will collapse. If this occurs, sooner or later we will collapse too, economically and ecologically.

We do not want to lose our bluefin tuna, one of the few warm-blooded fish in the world, the fastest fish in the ocean and a vital predator for having a healthy marine ecosystem. There is no time to lose.

It is not a piece of sushi served in a fashionable restaurant which has no price, what is really valuable is that the bluefin tuna never stops sailing the world’s oceans.

As citizens of this planet, it is our moral and life responsibility to fight for the protection of this incredible species.

Campaign for the Bluefin Tuna
Ocean Sentry (More informationThis e-mail address is being protected from spambots. You need JavaScript enabled to view it <!– document.write( ‘</’ ); document.write( ‘span>’ ); //–> ) 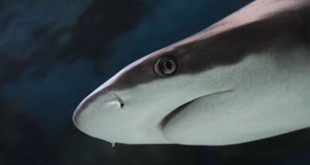 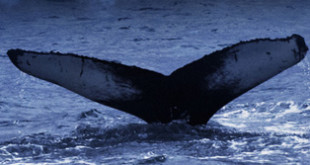