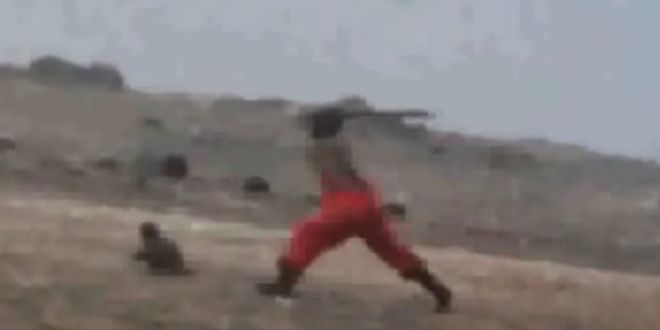 The desperate pups – some still nursing from their mothers – try to escape into the ocean, but they are simply not quick enough.

The video was filmed in Namibia, where colonies of seals are often preyed on to make profit, according to PETA.

They are killed in so-called ‘seal reserves’, beach colonies where pups are born and nurse for up to a year. These pups are still nursing when they are forcibly separated from their mothers, corralled in an area of the reserve, and then clubbed and stabbed to death, in the vicinity of their mothers. The level of killing is more evenly distributed over the four and a half month period, so the colony is stressed daily for this entire time.

“This ordeal is so violent and terrifying that seal pups often vomit up their mothers’ milk on the sand.”

Namibia is the only country in the Southern Hemisphere where massacring seals is still legal.

The Cape fur seal has been a protected species in South Africa since 1973, under the Sea Birds and Seals Protection Act, and commercial seal harvests were banned in 1990. Namibia still has an annual seal hunt in which animals are killed for trade. Since 2010 the European Union has banned the trade in imported seal products.

The group claim: “The driving force behind all this bloodshed is greed: a handful of people profit massively from exporting the seals’ skins.”

“Thousands of adult male seals are also killed every year so that their genitalia can be sold as an aphrodisiac in parts of Asia”, said PETA.

During the past decade, Namibia has exported 400,000 skins – representing one of the largest trades of any mammal out of Africa. Most go to Turkey, where fashion mogul Hatem Yavuz has them made into “wild fur” coats. Most are exported to Turkey, where fashion mogul Hatem Yavuz turns them into wild fur coats. According to Seven Network, one of Australia’s main free-to-air commercial television networks, Yavuz controls 60 percent of the global market for seal products.

Namibia, where seals are listed among the most important commercial marine species, has set an annual hunt quota of 80,000 Cape fur seal pups and 6,000 bulls.