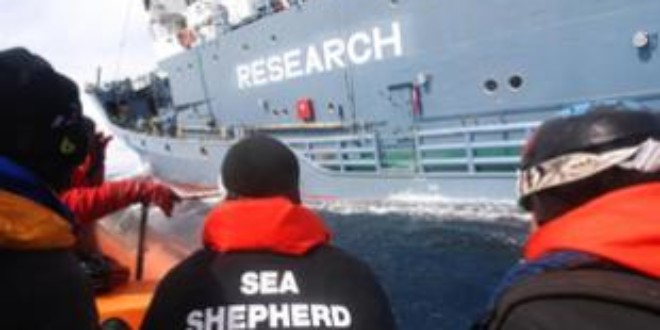 A whale of a mission

New Discovery Channel series Whale Wars starts on Monday April 27 and shows eco-pirates battling Japanese whaling fleets in the Antarctic Ocean. We speak to maverick Captain Paul Watson and crew member Steve Roest about their mission. Pirates tend to get a bad rap in the press, but a new generation of “eco pirates” fighting for the conservation of marine species is trying to change that.

Warrior Captain Paul Watson is leading this motley crew through the choppy waters of a new era.

The 53-year-old white-haired and white-goateed former Greenpeace founder has spent the past 30 years at the helm of the Sea Shepherd Conservation Society, where his war-like approach to marine conservation has seen him scuttle illegal whaling ships, get shot at, face jail in the Netherlands and be chased out of Guatemalan waters – all in a mission to defend the seas’ creatures and habitats from illegal poaching and destruction.

“You wouldn’t walk down a street and see a woman getting raped and do nothing,” says Watson by way of explanation, calling from Sea Shepherd’s headquarters in Friday Harbour, Washington State.

Put simply, Watson hunts hunters. The stocky Canadian, a former merchant seaman, knows international maritime regulations like the back of his hand and peppers his speech with war lingo like “attacking when the enemy is unprepared”.

And Sea Shepherd, a marine conservation organisation, has a few enemies.

For the past few years, Watson and his hodgepodge crew of volunteers and staff have taken to the seas from Melbourne, Australia down to Antarctica, in a two-month long journey to find and stop the Japanese ships that hunt whales in the name of research.

This trip has been chronicled in a new Discovery series, Whale Wars, which pits the eclectic group of eco-pirates against the Japanese whalers.

The whalers claim they’re taking whale samples for research; Sea Shepherd claims the whales are being killed for commercial purposes. Both claim to have the law on their side.

Watson is the James Bond of marine conservationists: a cunning, thoughtful, quick-witted man who preys on his enemy’s weaknesses.

The captain claims that he and his crew try to stop ships only by “any non-violent means necessary”, but Watson’s methods wouldn’t necessarily make Gandhi proud.

His arsenal of weaponry includes butyric acid (stink bombs), media-savvy techniques of reverse kidnapping, ramming ship against 8,000 tonne ship, jumping aboard enemy vessels and attempting to sink them by fouling their propellers.

It’s exactly these approaches that forced Watson out of Greenpeace in 1977, with the charity claiming that his penchant for “acting out the role of mutineer”, according to Greenpeace’s Bob Hunter, made violence inevitable.

And it’s not just with Greenpeace that Watson has found trouble. His crew also seem to struggle with his dangerous missions.

Sea Shepherd depends on volunteers, which might make everyone “ultra cautious” (as Watson claims) but in reality – or at least on TV – it seems like an open invitation to chaos.

Few of the crew, who come from Sweden, Holland, Australia, the US and UK, have ever been at sea before, while the volunteer in charge of the engine room admits he can barely change a bike tyre.

The result is a fearsome but adrenalin-fuelled series. The first two episodes alone show a capsizing amid icebergs in the chilly Antarctic waters, a hostage situation aboard the Japanese whaling vessel and a near-death experience whereby Watson ends up getting shot in the chest with, he claims, a shotgun. (He was wearing a bulletproof vest.) While populating a ship with novices keen on stopping a billion-dollar whaling industry might seem like suicide, to those involved it seems like the only way forward.

“I could not buy the kind of passion that these volunteers bring to the table, and that’s what makes Whale Wars so fascinating,” says Watson.

“They’re not here for the money but to protect the whales.”

“Whales are dying as we speak and we’re the only people in the world doing something about it,” she says.

Whales have been hunted for centuries for their meat, blubber and oil, which once made items as diverse as candles, cosmetics and corsets.

But with the advent of synthetics and petroleum, the need for whale by-products died out enough to result in an international moratorium on commercial whaling in 1986.

Despite that ban, whaling for research and aboriginal purposes is still legal, and has allowed Japan, Russia and the US to continue to hunt whales.

Japan has killed 25,000 whales in the name of research in the last 20 years. Watson fears this is an attempt by the nation to protect its share of the coal, uranium and oil resources lying beneath the Antarctic ice.

If the International Whaling Commission agreed on a ban, one would think someone – or something – would defend that ban. But no government has yet patrolled the waters to ensure that that moratorium is in place. Hence Sea Shepherd’s policing of the Antarctic waters.

“There’s a lack of economic and political will [among nations] to do anything about this illegal whaling but we, as Sea Shepherd and as individuals, are empowered to intervene and uphold international conventional law under the UN’s World Charter for Nature.”

“It took pirates to close down piracy in the Caribbean, and it’s going to take a pirate to close down these pirate operations too,” he says.

“And for that whales are far more intelligent than we are.”

Whales :: Whales have been hunted for centuries for their blubber, oil and bones – used to make candles, lipsticks, cosmetics, corsets, crayons, perfume and soap.