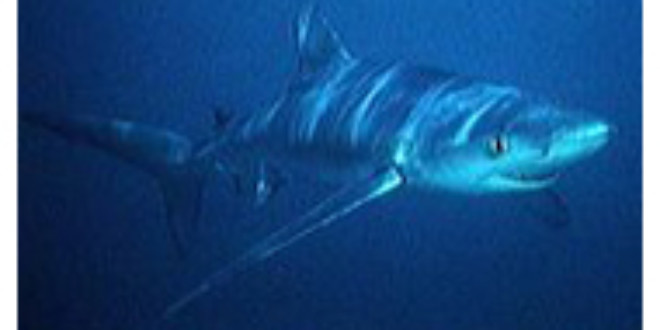 Though other reports had concluded that the region’s blue sharks were declining by around 60 per cent, the new analysis reduced the estimate by half, finding that populations of the 12.5-foot-long sharks have dropped by only 30 per cent since the mid 1950s, when large-scale fishing practices began in that part of the Atlantic.

The study concluded that blue sharks appear to be most vulnerable to swordfish fishing gear – hundreds to thousands of baited hooks hanging from a single line. The lines are deployed at shallower depths at night after dusk, when the sharks feed.

Tough blue sharks sometime become by-catch, but since US and Canadian consumers tend to not like the shark’s taste, they haven’t gone after the blue shark for its meat.

“In these countries, the blue shark meat has historically been regarded as unpalatable due to its soft texture and strong odor of ammonia, so that targeted fisheries did not develop,” explained Aires-da-Silva.

Two other factors have helped the shark.

The first is that they are rather hearty fish and often survive after being caught on a long line. The second is that blue sharks are among the most productive shark species in the world, with females producing an average of 37 pups per litter, with some litters numbering 80 pups or more.

These pups can nearly double their size over their first year of life to increase their chances of survival,” said Aires-da-Silva, adding that it “is not a coincidence that the blue shark has often been described in the scientific literature as the most widespread and abundant of the pelagic sharks in the world’s oceans.”