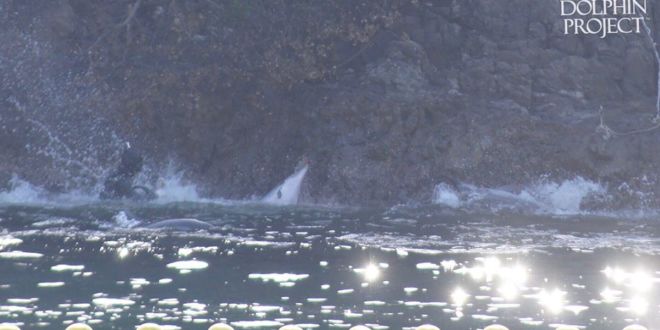 It was a very bloody morning in Taiji as a pod of 51 Striped dolphins was brutally murdered. The level of cruelty that was inflicted on these animals was unimaginable.

Due to being a larger pod, the hunters were not able to disguise the absolute horror that took place.

Many dolphins threw themselves at the rocks in panic, cutting their skin and bleeding out in the process, before divers came and tied ropes around their tails and handed them over to the skiffs.

Hunters then dragged the still-living dolphins under the tarps to their deaths as they struggled and thrashed against the boat.

We witnessed one diver find a dead dolphin wrapped in the nets, its lifeless body was then also dragged by its tail under the tarps, and we observed another individual, who was trapped between the net and the rocks in the blood of its dead pod members, take its last breath and float upside down.

Each of these dolphins was tortured, harassed, and mutilated before finally being massacred in front of their whole family.

The slaughter lasted at least an hour, and the Cove was stained bright red. There are no words to describe the devastation that occurred here today

Please, be a voice for the voiceless and TAKE ACTION

Share
Previous European eel (Anguilla anguilla) – Population has declined by as much as 95% in the last 25 years
Next Ganges River Dolphin (Platanista gangetica) – Only 1,200 – 1,800 individuals remain