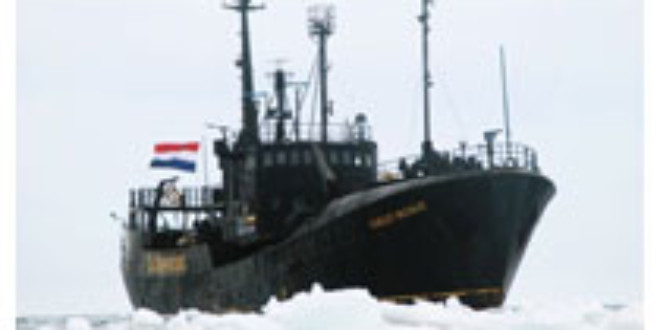 (From indymedia.org.uk)- At 0700 Hours (PST) and 1100 Hours Atlantic time the Sea Shepherd Conservation Society vessel Farley Mowat was attacked by officers from two Canadian Coast Guard icebreakers the Des Groseilliers and the Sir Wifred Grenfell. Captain Alex Cornelissen informed the boarders that the Farley Mowat is a Dutch registered ship in international waters and that Canada had no legal right to restrict the free passage of the vessel through international waters. The ship was in the Gulf of St. Lawrence well beyond the Canadian twelve mile territorial limit.

It has been reported that both the 1st officer and the captain of the ship have been arrested and will be brought before a court in Sydney, Canada. According to Federal Fisheries Minister Loyola Hearn, the “safety and security” of the sealers is the government’s main focus and the seizing of the Sea Shepherd vessel will ensure a “safe and orderly” seal hunt. Last week, the same Mr. Hearn announced that Canada would lay charges against the captain and first officer of the anti-sealing vessel for coming too close to the seal hunt.

Captain Paul Watson was speaking by phone with Farley Mowat communications officer Shannon Mann when he heard the voices of men screaming for the crew to fall to the floor. The men carried guns according to Mann and could be heard by Captain Watson threatening the Farley Mowat’s crew. As Captain Watson was speaking with Shannon Mann, the Satellite phone went dead and nothing more has been heard from the Sea Shepherd crew. The Farley Mowat was documenting violations of the humane regulations and gathering proof that the seals were being killed in an inhumane manner. The Sea Shepherd Conservation Society is assuming that the video tapes will be seized by the Canadian authorities. There are 17 crewmembers onboard the Dutch registered Farley Mowat from the Netherlands, the United Kingdom, France, Sweden, South Africa, Canada and the United States.