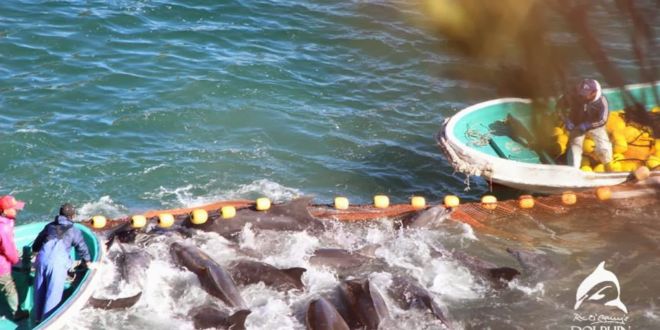 Annual dolphin slaughter is about to begin in Taiji, Japan

The notorious annual dolphin drives are scheduled to begin in Taiji, Japan, on September 1 and will continue until at least March. The Taiji hunt is among the world’s largest dolphin hunts, both in terms of raw number of dolphins killed and the number of species targeted.

Every year, fishermen locate pods of migrating dolphins out at sea and herd them using boats, nets, and long metal rods that crew members dip below the surface and pound to create an acoustical wall that disorients the dolphins’ sonar.

While many dolphins are killed for meat, others are sold to zoos and marine parks worldwide, making the drives an incredibly lucrative business.

While none of the species targeted by the Taiji hunt are listed as endangered by the International Union for Conservation of Nature, three—short-finned pilot whales, pacific bottlenose dolphins and false killer whales—are listed as data deficit.

For this year’s hunt, the Japanese government set a kill quota of 2,040 dolphins of various species, according to the Dolphin Project.

Dolphin Project is the only organization to have been on the ground in Taiji since 2003. Utilizing revolutionary live streaming, Dolphin Project document and broadcast the results throughout the course of the entire season in hopes of bringing this cruel practice to an end.