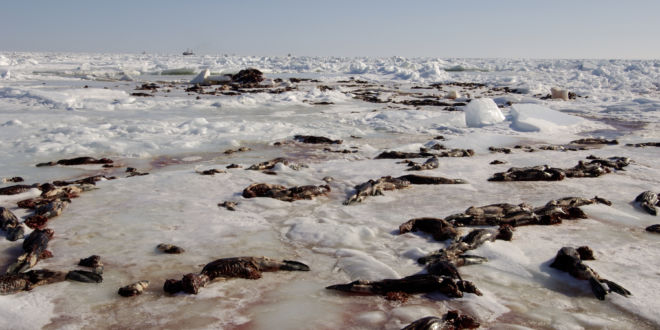 The Department of Fisheries and Oceans Canada (DFO) has released the new number of harp seal pups “landed” so far: 43,107.  This figure does not include seals who were “struck and lost.”

Not all of these pups end up in someone’s unnecessary fur coat.

Each year, some seal pelts are disposed of, generally because they weren’t sold before they rotted.

In some years thousands of seal pelts have been dumped or burned. This slaughter is a waste of precious lives, lives of seal pups who should be allowed to live.

This year, Newfoundland sealers claim they want to club and shoot to death at least 80,000 seals, all to produce products no one wants to buy.

Canada subsidizes the largest mass slaughter of a marine mammal species in the world – the annual harp seal massacre.