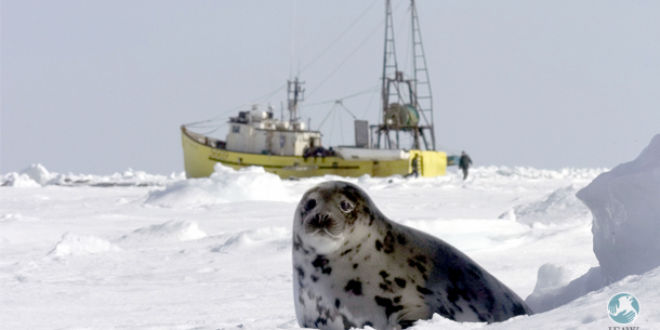 According to new update from the DFO, the number of harp seal pups “landed” has been corrected downward to 59,076, and the slaughter has ended. “Harvest activity has ceased for the time being,” says the DFO official. But most likely, sealers are now busy with their usual fishing endeavors.

Estimating the number of “struck and lost” seal pups as between 5 and 10% of the number “landed” indicates that probably between 62,000 and 65,000 harp seal pups actually lost their lives to these off-season east coast Canadian fishermen this year.

Not all of these pups end up in someone’s unnecessary fur coat. Each year, some seal pelts are disposed of, generally because they weren’t sold before they rotted. In some years thousands of seal pelts have been dumped or burned. This slaughter is a waste of precious lives, lives of seal pups who should be allowed to live.

Off-season fishermen in Atlantic Canada club and shoot harp seal pups each year in their nurseries on the ice floes in the Gulf of St. Lawrence and just as they are learning to swim and feed off the coast of Newfoundland and Labrador. Almost all of the harp seals killed are pups between 3 weeks and 3 months of age. This slaughter is not only approved by Canada’s government, the government promotes, subsidizes, and facilitates this slaughter.

In many years, thousands to tens of thousands of harp seal pups drown before they are able to swim, due to a lack of sturdy sea ice. This year, the sea ice in the Gulf of St. Lawrence, a major pupping area, was poor during the pupping time in February and March. This means that most of the seal pups who were born on the ice in that area probably drowned. Still, Prime Minister Trudeau allows sealers to kill those who have survived the effects of climate change, in violation of the Precautionary Principle.