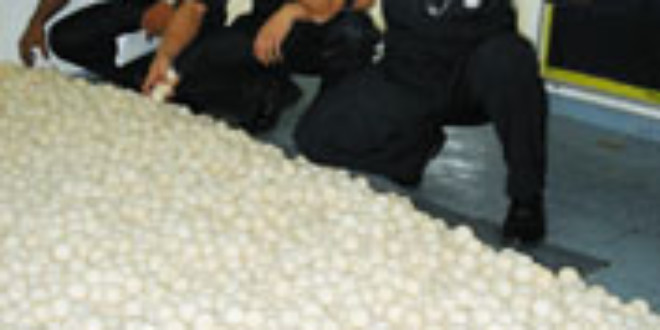 (From dailyexpress.com.my)- Marine police here foiled an attempt to smuggle in 10,000 turtle eggs worth RM28,000 at the coastal area near Kampung Forest, Sunday night. Acting Sandakan Marine Police chief Acting Asst Supt Muhammad Sallam Spawi said this was the biggest seizure of turtle eggs in the municipality so far.
According to him, marine police personnel involved in Ops Tayang in the Kampung Forest coastal area came across several men in a suspicious manner unloading “something” from a speedboat, at about 8.15pm, on Sunday.

Approaching the men, they identified themselves, but the men sped off in the boat towards the open sea. Upon checking, the police recovered the eggs in 20 sacks, believed brought in from the Philippines for the local market.

The eggs, listed in the protected list of the Sabah Wildlife Department, could fetch RM2.80 each.

These items had been referred to the Wildlife Department for further action.

Muhammad commended public cooperation for the recovery of the turtle eggs.